Where did I go: The Alhambra, Granada, Spain

Today is the highlight of our week-long trip to Spain, covering Madrid, Seville and Granada. We are visiting the World famous Alhambra.

0915:  Waiting for the tour bus. I had pre-booked tickets  for a guided tour with Granavision. For about £40, Granavision offers a pickup service from the hotel in Granada town centre and a guided tour of the Alhambra. Our hotel was on a little side street which was not wide enough for the pick up bus, so Granavsion called us a few days before and made arrangements to pick us up at the Hotel Melia, which was a 5 minute walk away.

0945: After a brief panic where I think they’ve forgotten us, the tour bus arrives, slightly late due to the traffic.

1015: We are at the Granavision visitor centre outside the Alhambra, where we are issued headphones and radio receivers for the tour. We are then divided into groups depending on the language we wanted to listen to the tour – English, Spanish, French tours were on offer today.

1100: The Alhambra consist of a complex of palaces, courtyards, citadels and gardens. The royal palace (known as “Nasrid Palaces”) has timed entries, but the rest of the complex can be visited at your own pace.

Our guided tour of the Alhambra starts with a visit to the Generalife gardens. The Generalife Gardens (“the gardens of the Architect”) was built in the 14th century as a summer palace for the Nasrid Emirs. Full of orchards, summer houses, courtyards and many water features, it is meant to represent the gardens of heaven.

One of my favorite features of these gardens is the “Water Staircase”. It’s a stairway connecting the upper and lower Generalife gardens, but instead of a hand rail, you have a channel with running water. The laurels on each side of the staircase join above our heads to form an archway. It’s not a particularly warm day today, but in the summer, I can imagine the laurel ceiling and the running water providing a much welcome relief from the high temperatures. 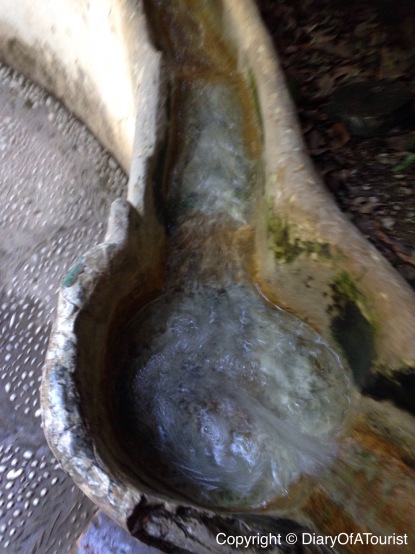 There are many small pavilions scattered across the gardens, from which you can get great views of the rest of Alhambra and the city below.

1200: We are heading back to the main part of the complex via more beautiful gardens. Many of them more recent additions from the 16th century onward.   We also see the aqueduct which supply the water to the palace from the nearby hills. 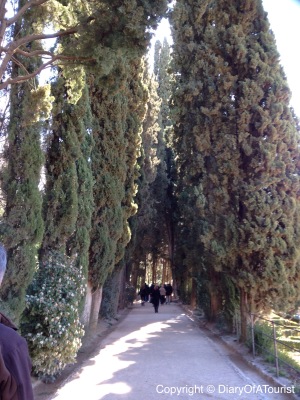 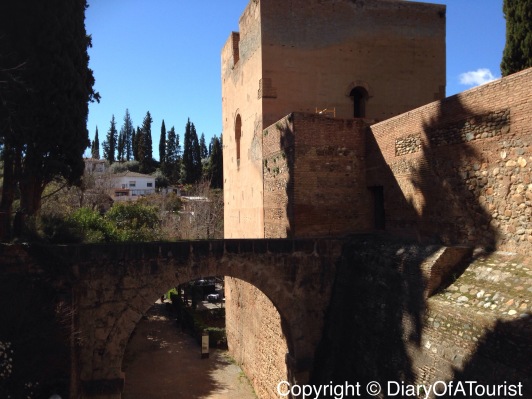 The name “Alhambra” stems from the Arabic “Al-Hamra”, which translates to “The Red Castle”. The history of the Alhambra dates back to 889 AD, when it was constructed as a small fortress by Sawwar ben Hamdun on the remains of  pre-existing Roman fortifications. Then in the 13th century, Emir Mohammed ben Al-Ahmar of the Emirate of Granada built the current palace and walls. In 1333, it was converted into a royal palace by the Sultan of Granada, Yusuf I. Following the Christian Reconquista in 1492, the site became home to the royal court of King Ferdinand of Aragon and Queen Isabella of Castile. During this time, the palace was partially re-modelled to Renaissance tastes, the most notable being the Renaissance palace commissioned by Charles the V in 1526.

After falling in to disrepair for centuries, the Alhambra was rediscovered following the defeat of Napoleon. It is now the 3rd most visited tourist attraction in Spain behind the Museo del Prado in Madrid and the Sagrada Familia in Barcelona.

Our route back takes us past Hotel Parador, located on the grounds of the Alhambra. Originally this was part of the palace complex built by the Moorish kings.  Following the Reconquista,  a monastery dedicated to San Fransico was built here by Queen Isabella. Following the death of Isabella and Ferdinand,  they were buried here, until the completion of the Royal Chapel in the city below. Today, it is a luxury hotel. The remains of the monastery are still preserved inside the hotel, where visitors are welcome to take a look.   The restaurant has a very good reputation too, I’m told.

1215: Looking around inside the ancient steam baths of the Alhambra. It’s a small space, but the intricate works are a testament to the skills of the craftsmen –  especially the sky lights. 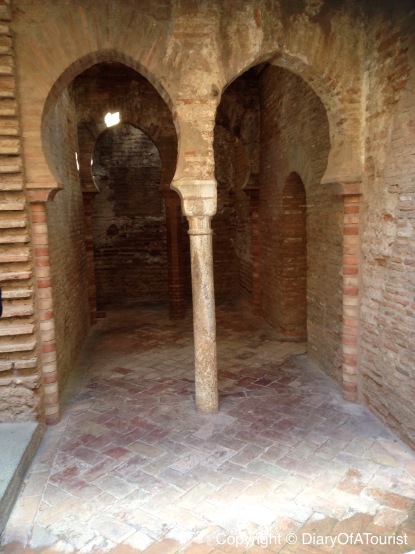 The Church of Santa Maria is located next to the baths. The distinctive church spire rises up against the Alhambra skyline. This was built in the 17th century.

1230: At the palace of Charles the V built in 1526. Charles the V and his queen Isabella of Portugal came to Alhambra for their honeymoon for a two week stay. As the story goes, they loved Alhambra so much they stayed for many months and it became their summer residence.

The Emperor ordered the construction of a new palace in the grounds of the Alhambra adjacent to the Nasrid Palaces. Built in the Spanish renaissance style, it’s  a big and bold building, and is in contrast to some of the older buildings that look rather understated from the outside.

Inside the palace there’s a circular patio with many Roman columns. The upper and lower floors of the palace are now museums which are free to visit.

1245: At the wine gate. So called because this was one of the boundaries of the Alhambra and outside this gate you could drink wine without tax. Tour takes a 15 minute break. 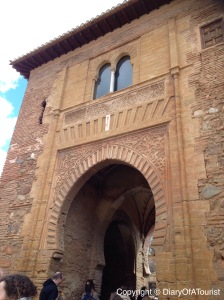 1300: On to the Alcazaba – this is a fortress and is the oldest part of the Alhambra. It consists of a number of watchtowers and barracks for the troops. 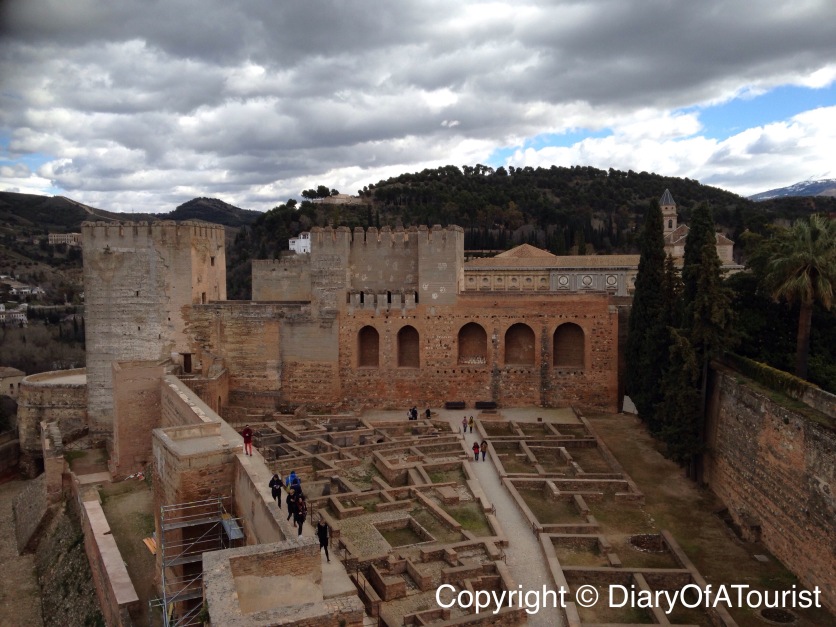 From the top of the citadel, you get sweeping views of the city, including the Mirador San Nicholas, which we visited the day before.

1330: Time to see the Nasrid palaces – the living quarters of the Royal family. This is where most of the guidebook photos of the Alhambra comes from. It is a complex of rooms, pavilions and courtyards, each more beautiful and embellished than the preceding ones.  It reminds me of the Real Alcazar in Seville, but more elaborate and extensive.

There are too many beautiful rooms here to describe each one in detail, so I’m going to write about just a few of my favourites. This link provides a really good description on all of them.

Courtyard of the Myrtles – which gets its name from the myrtle bushes that surround the central pond. It is “book-ended” by Comres Palace (with Charles the V palace behind it) on one end and the Comres Tower on the other. It is believed that a number of rooms of the Comres Palace was demolished to build the Palace of Charles the V. 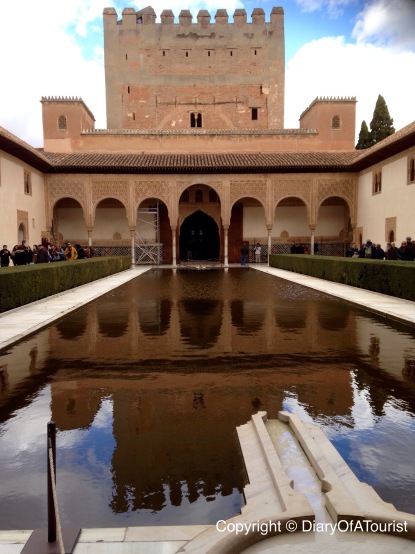 The Hall of the Ambassadors is next, which is a large square room with very high ceilings. It is located inside the Comres tower, which is the highest and most prominent tower of the Alhambra. This is essentially the throne room where the monarch held court. Allegedly, this is where Christopher Columbus receive the blessing and support from Queen Isabella and King Ferdinand before his voyage to discover America. 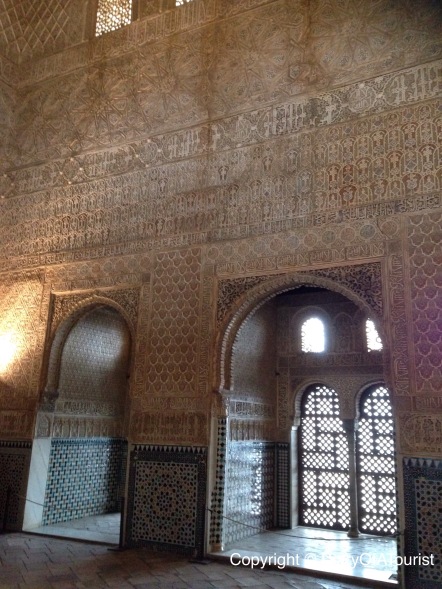 The Courtyard of Lions – this is considered by many to be the center piece of Alhambra. It gets its names from the fountain of 12 lions in the middle of the patio. The courtyard is surrounded by the Palace of the Lions which contained the private chambers of the royal family.

The detail and intricacy of the plaster works inside each room is amazing, especially on the ceilings. The paintwork has disappeared from much of them, but what remains is sufficient to imagine the glamour of this palace in its heyday. 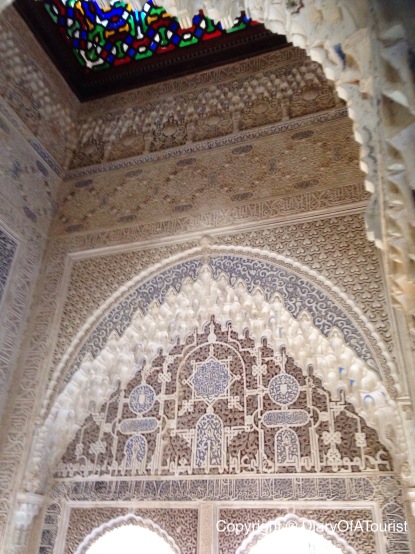 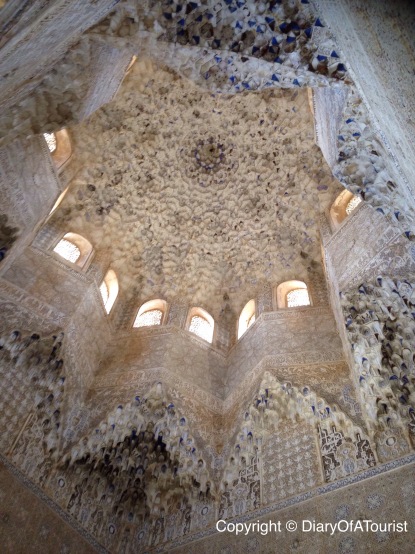 The tour finishes outside the Nasrid palaces. There are further towers and ramparts here that provides views of the Arabic quarter of Granda. The most picturesque is the Ladies tower.

1500: Walk downhill past the Justice Gate, back to the city.

So, here are my top tips for visiting Alhambra:

On the whole, is it worth it? Definitely.  It’s a window in to the past, into a different culture. Most of all, it is a chance to see and appreciate the talent and the workmanship that went in over many centuries to create such a magnificent palace.

This post is a part of #MondayEscapes with Packing My Suitcase and My Travel Monkey .