We visited Tallinn in December 2016, so this post has been 18 months in the making.  We spent 4 days in Tallinn and got the chance to explore the Old Town pretty well. It’s been a while so I can’t remember what we did day-to-day, so this post is written around  some of my favourite things in the Old Town.

The Bastion Tunnels that surround the old town date back to the 1600s. These tunnels were built under the city walls for moving soldiers and ammunition in times of need.

Over the centuries, the tunnels have had many uses. In World War II, they served as bomb shelters. During the Soviet period they were modernized to add electricity, running water, ventilation and phones.

Today, a portion of the tunnels are open for tours. During the tour you go through some of the oldest parts of the tunnels and you can see how the tunnels changed over the centuries. Tours start at the watch tower (Kiek in de Kök) and the tunnels also have some wax figures to give you a feel was what it waslike back in the day.

The Estonian Parliament sits in the upper part of the old town on Toompea hill. In the early 20th century, the medieval Toompea castle was extended with a new building for the parliament, or the Riigikogu. During the Soviet occupation and World War II, the Riigikogu was disbanded. The parliament was re-established in 1992 following independence and serves as the centre of the government today.

The outside of the parliament (photo above) is painted in dusky pink and for me this alone was enough to want to take a look inside. Visits to the parliament are by guided tour only.  English tours take place at 11.00 a.m. on a Friday. Advanced booking is not required for the tour – just turn up at the reception at the tour time and register. Bring a photo ID with you. Inside, you can see the state-room, parliament chambers and the Toomepea castle. 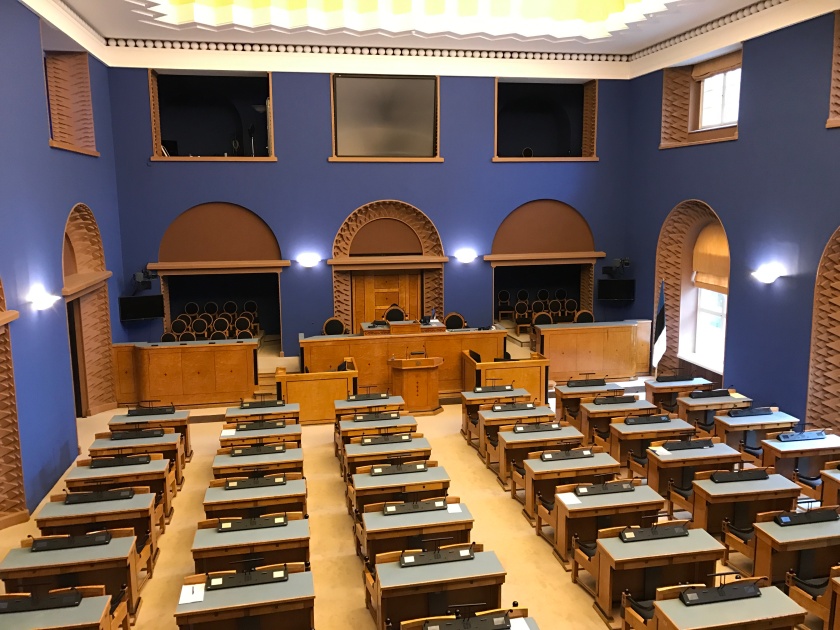 3. Danish King’s Garden and Cafe on the wall

We accidentally stumbled across this little part of the old town. Where the upper and lower towns of Tallinn divide, there is a pretty garden. And up on the wall here, there is a walkway, and a cafe. If you don’t mind some pretty steep stairs, you can sit at the cafe on top of the wall and sip a hot chocolate whilst you gaze out at the old town. Watch out for the facelss monks! 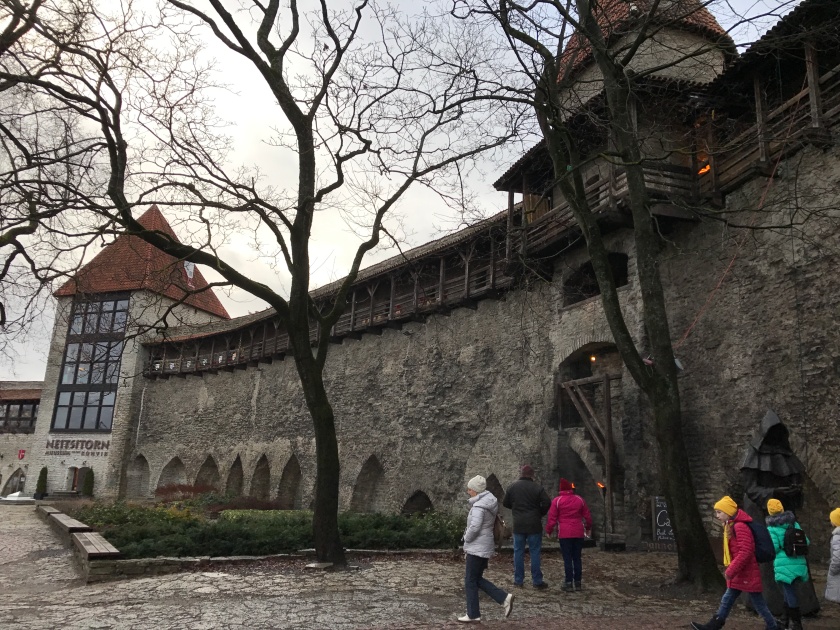 The old town of Tallinn is not short of a church or dozen. We visited a few: The Alexander Nevsky Cathedral, St Nicholas’ Church and St Mary’s Cathedral.  All of them were very impressive, both inside and outside. 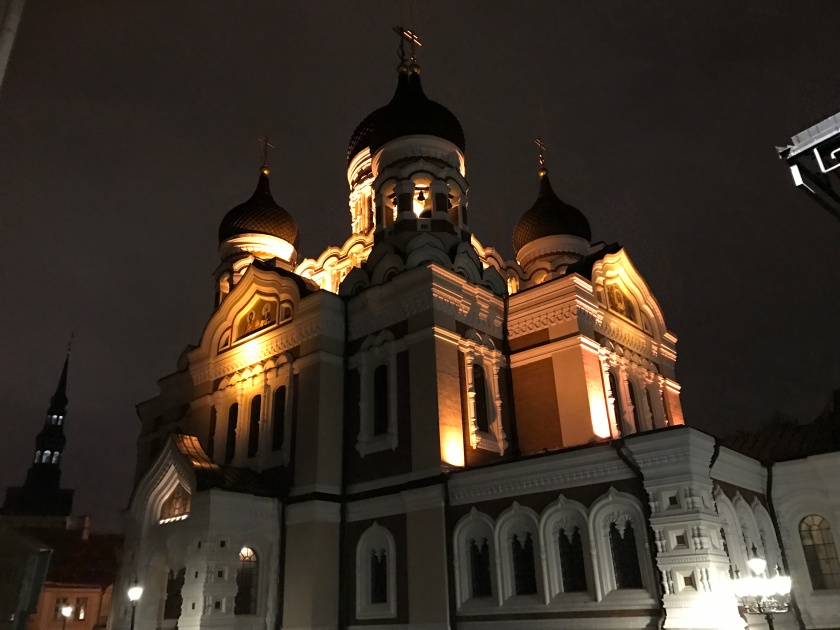 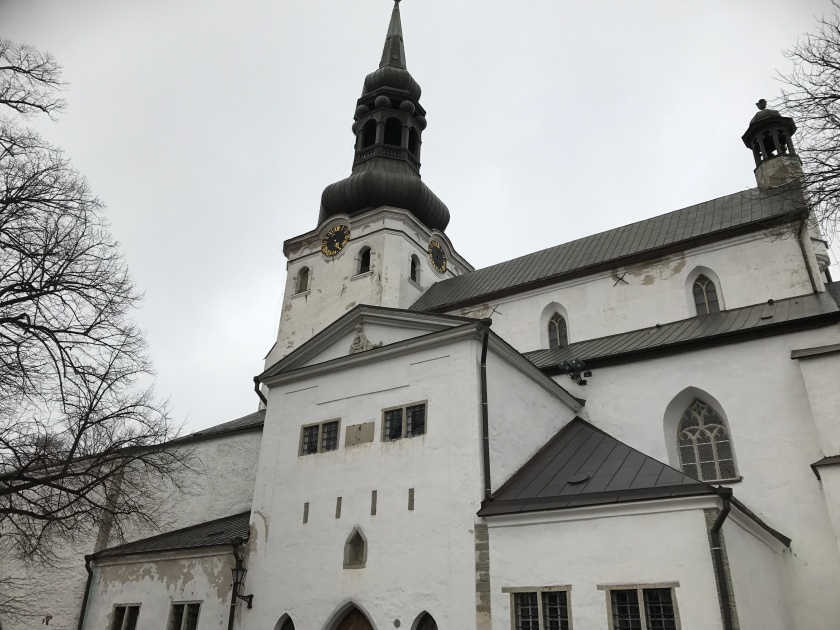 The Viru gate is part of the old network of gates that surround the old town. Out of all the towers on the city wall, the Viru towers are particularly well-preserved. This is one of the main entrances to the town and Viru Street which starts at the gates have many shops and cafes. It is a great place to hangout but beware, it is also one of the most expensive parts of the town. 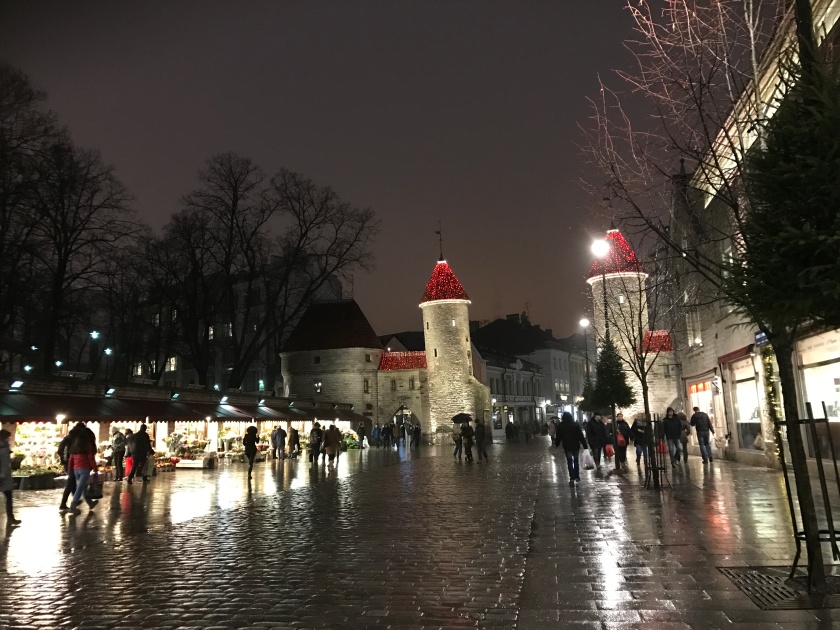 St Catherin’s Passage is a pretty little walkway in the old town. It is lined with jewellery and craft shops.

“Raeapteek” or the old Town Hall Pharmacy is located on the town hall square and is known to be one of the oldest continuously running pharmacies in Europe. It was first started in 1583 by Johan Buchart and remained in the Buchart family for 10 generations.

Here, you can still see some of the olden remedies (think crushed beetles and dog faeces) as well as buy some of the modern medicines as well. 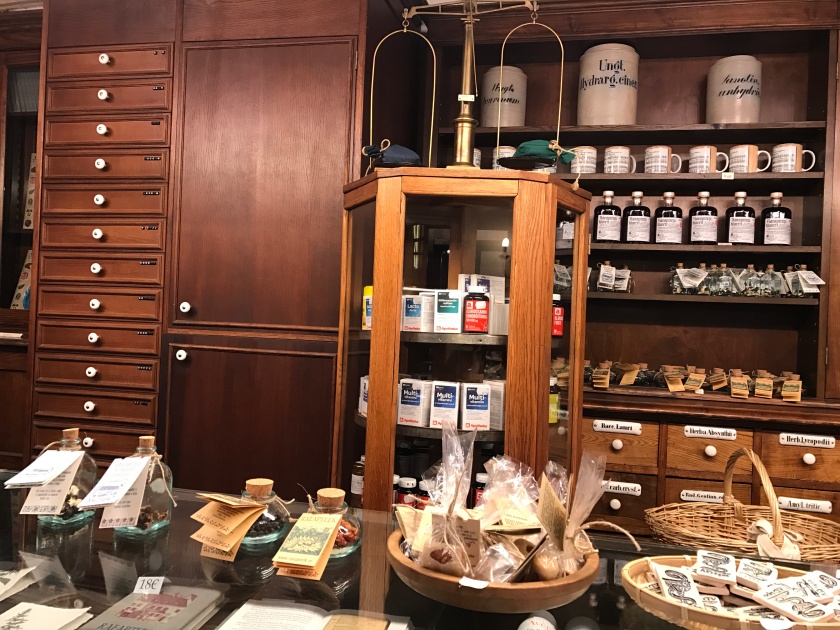 The old town square is at the heart of the old town. It’s particularly great during the Christmas months and has a Christmas market, a very large Christmas tree and a small stage. The town hall is to one side of the square. We didn’t visit the town hall but it looked impressive from the outside.

The old town of Tallinn is very much a walking town and you have many options to explore the city on foot. You can go for the DIY option, and wander around the city on your own. The old cobbled streets are charming and full of shops, cafes and bars. It’s hard to get lost, as all roads invariably lead to the central town square. Or you can choose to go on a city tour – either a private tour with a company like Estonian Experience or a free city tour which starts at the tourist bureau.

Tallinn is not short of places to eat and drink and we sampled quite a few. Here are some of my favourites:

This is a medieval restaurant just off the town hall square of Tallinn. It has a very authentic medieval setting. There are no electric lights, but hundreds of candles. The staff is all dressed in medieval clothing, and there is even a medieval entertainment troupe. Try medieval feast with the honey beer. But beware, the food is very rich. 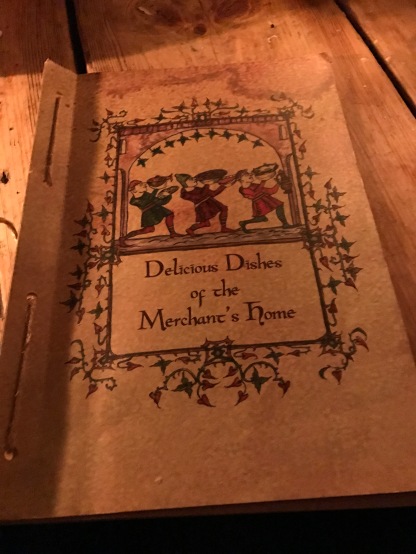 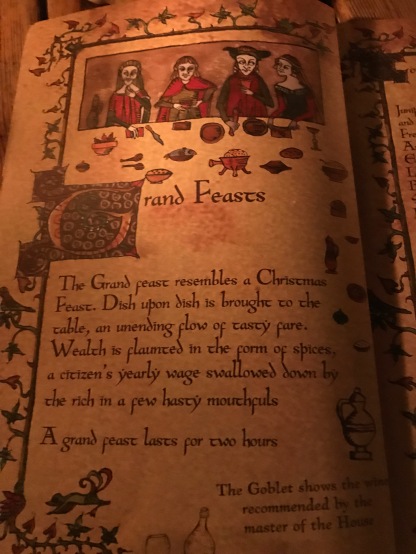 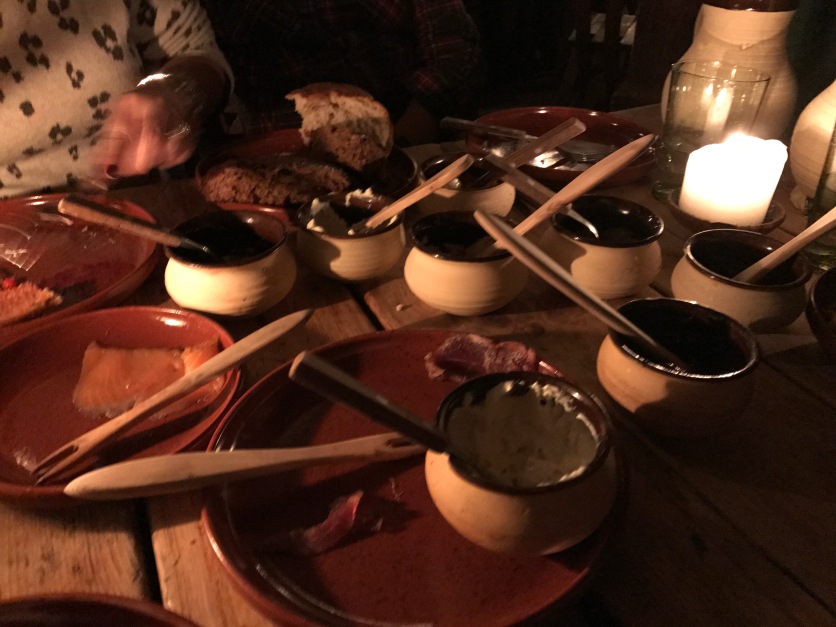 As the name implies, this restaurant specialises in one thing. Garlic. Every dish, even the desert, has garlic. Located on one corner of the town square, above the old Pharmacy, it has great views of the Old Town Square. Try and get a seat by the Window.

Kalev – The Marzipan Museum and Cafe

Marzipan is a popular export from Estonia. The Kalev Marzipan museum is a great place to see some of these Marzipan works of art being made. Back of the museum is the Maiasmokk (“Sweet Tooth”) cafe, the oldest operational cafe in Tallinn (and Estonia). It has been operating from its current location since 1864. The cafe’s unique interior has not changed over for almost a century. 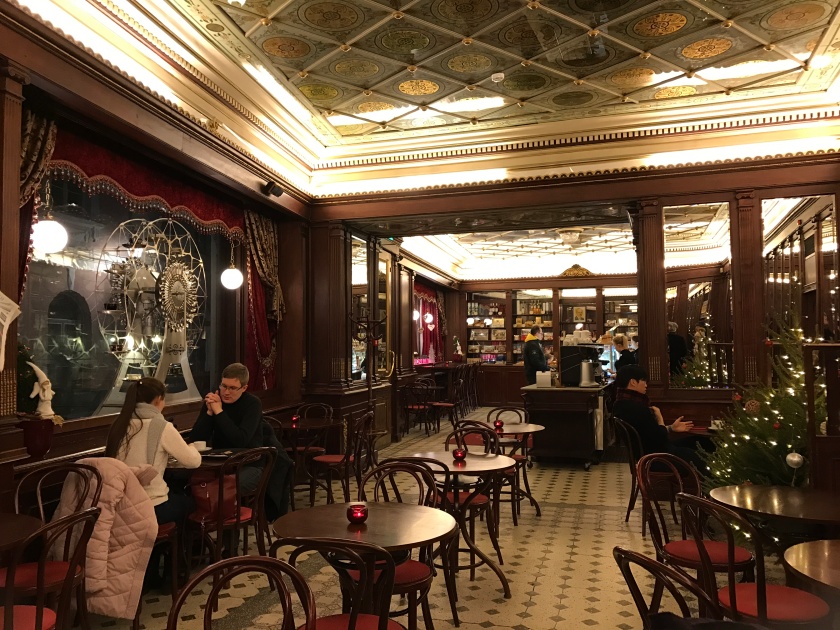 If you want straight forward gastro pub fare, look no further than Clayhills gastro pub. Although gastro pubs are very popular and quite common in UK, it is a relatively new phenomenon in Estonia. Clayhills claims to be the first gastro pub in Estonia situated in a medieval house not far from the Town Hall Square. We visited Clayhills on our Beer Tour of Tallinn to taste flight of beers, but we loved it so much, we stayed on for dinner.

A fairy tale town with Medivel castles, church spires and winding cobbled streets, it’s hard not to love Tallinn. It is quite a small town, and 2-3 days is plenty of time to visit it. There are some “must-see” places outside of the old town as well though. Read about these in my next post: Tallinn: Things to See and Do outside the old town.

Have you been to Tallinn? What are your favourite parts of the old town? Or perhaps you are thinking of visiting? What would you like to see? Leave a comment below and let me know.