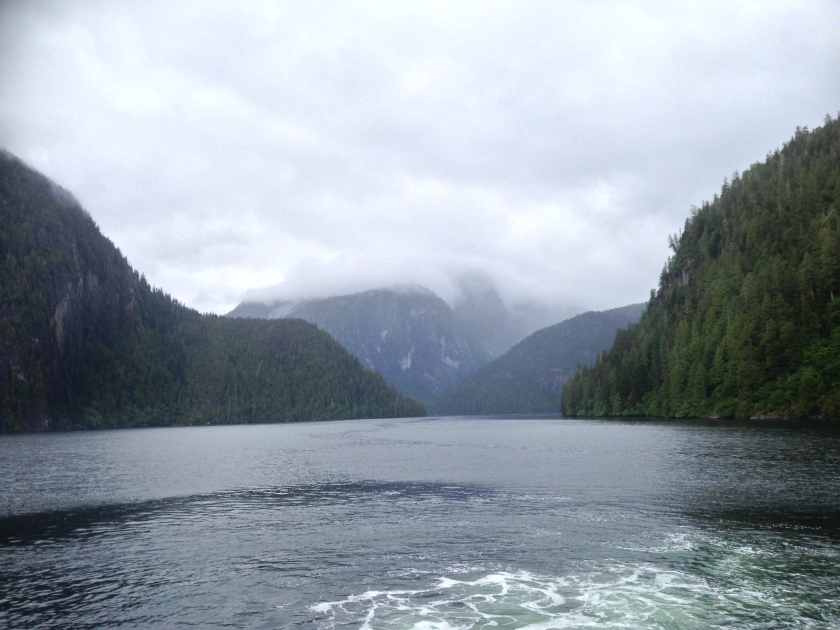 The Misty Fjords is a wilderness area in southeastern Alaska about 40 miles east of Ketchikan. The area is a labyrinth of fjords and home to an abundance of wildlife. It is designated as a  national monument and wilderness area administered by the U.S. Forest Service as part of the Tongass National Forest.

We had booked an excursion to see the Misty Fjords during our stop in Ketchikan, via our cruise ship, the Celebrity Infinity.  We got picked up straight from the dock on to one of Allen Marine’s fast catamaran boats. The boat slowly  cruised until it was out of the harbour, then picked up speed. It was a wet, rainy and overcast day. Perfect weather to see the “Misty” fjords in all its glory. 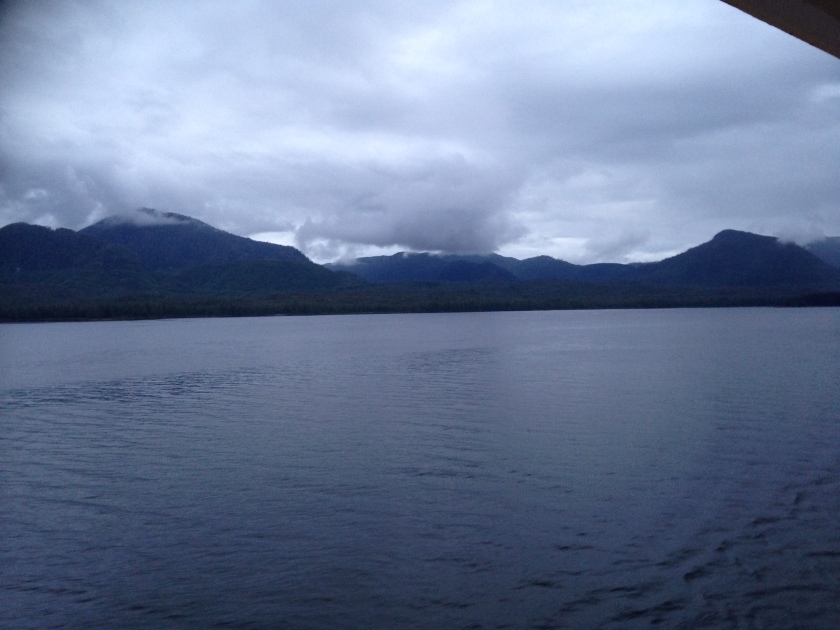 Soon we were cruising along the Revillagigeodo channel at 40 miles per hour. At this speed  the wind really hits you in the face and you have to hold on to something to keep you steady on the deck. If you prefer there are plenty of seats inside too. 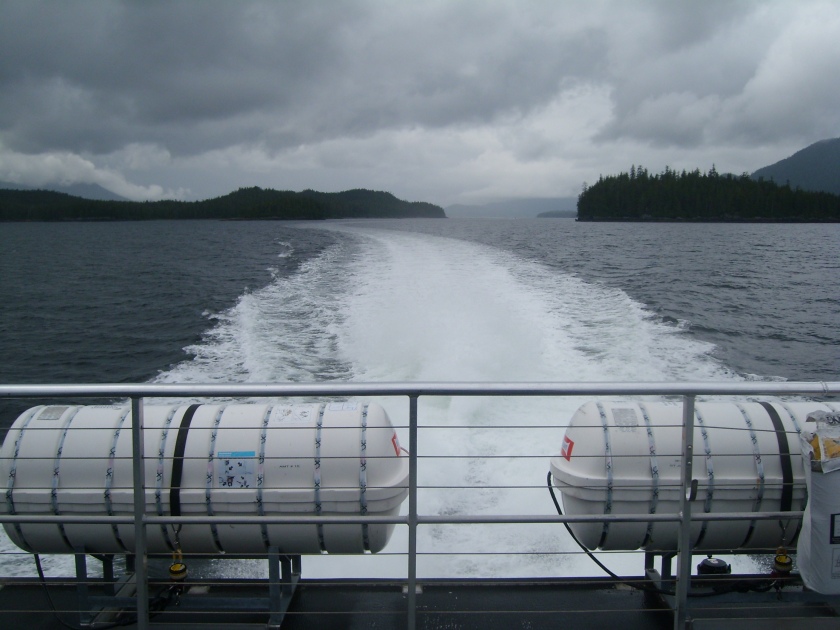 On the way, we stopped to look at a bald eagle nest, and there was a lot of excitement as one of the passengers spotted a bear. The boat did a 180 degree turn with surprising speed and agility to get another look, but by the time it did, the bear had disappeared.

After about an hour of cruising, we had turned into the Behm Canal and  come to the New Eddystone Rock.  This is a pillar of basalt and was part of a volcanic vent where magma rose repeatedly to the surface of the earth. After the basalt flows covered the floor of Behm Canal, another glacial advance pushed away much of the flow, leaving behind New Eddystone Rock and some of the islands to the northeast. 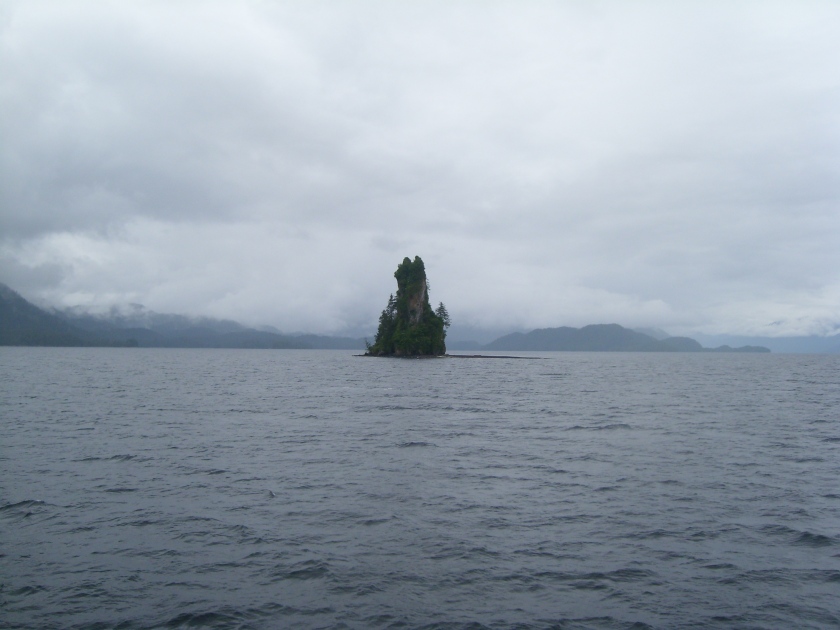 Shortly after the Eddystone Rock, we turned into Rudyerd Bay, our entry into the Misty Fjords.

It is unlike any other place I have been before.  The sheer granite cliffs rise upto 3000 feet from the water.  Wisps of clouds cover the cliff tops.  A narrow channel of water flows in between the cliffs. Waterfalls come tumbling down the cliffs. As the boat slowed down and made its way forward, we were entering a world of myths and legends. 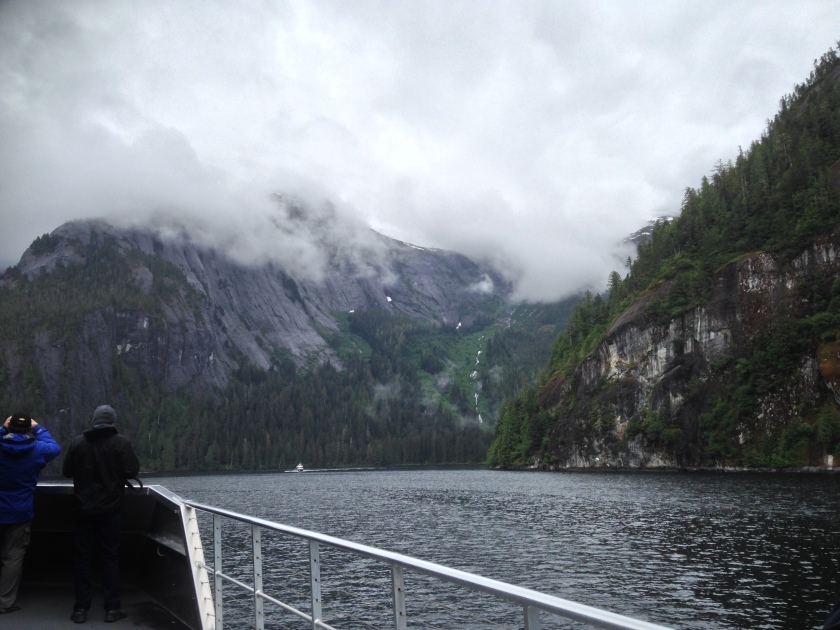 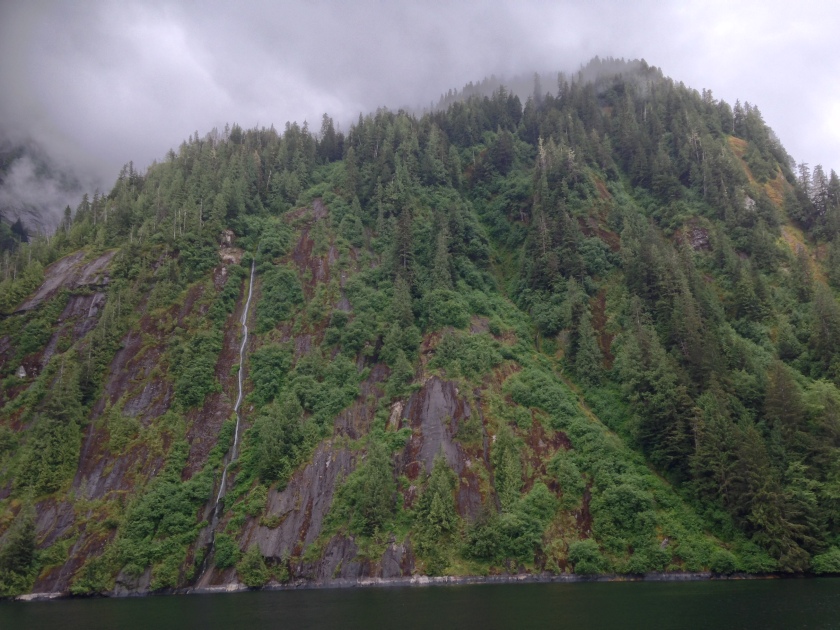 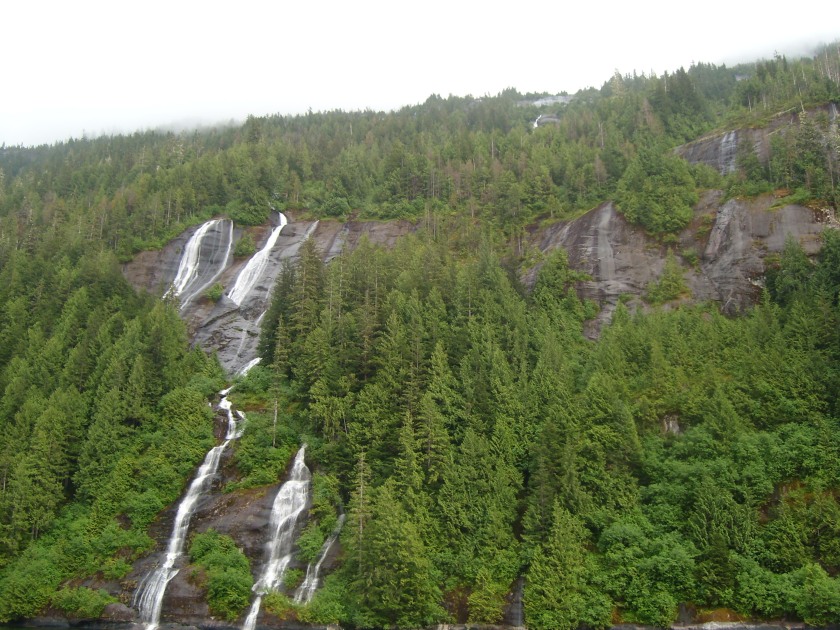 You could do a full 360 turn and the way you came looks exactly the same as the way forward. If not for the flow of water, it would be impossible to know which way is which and you could easily get lost in here. You never know what’s around the corner – a cove? a water fall? a cliff? 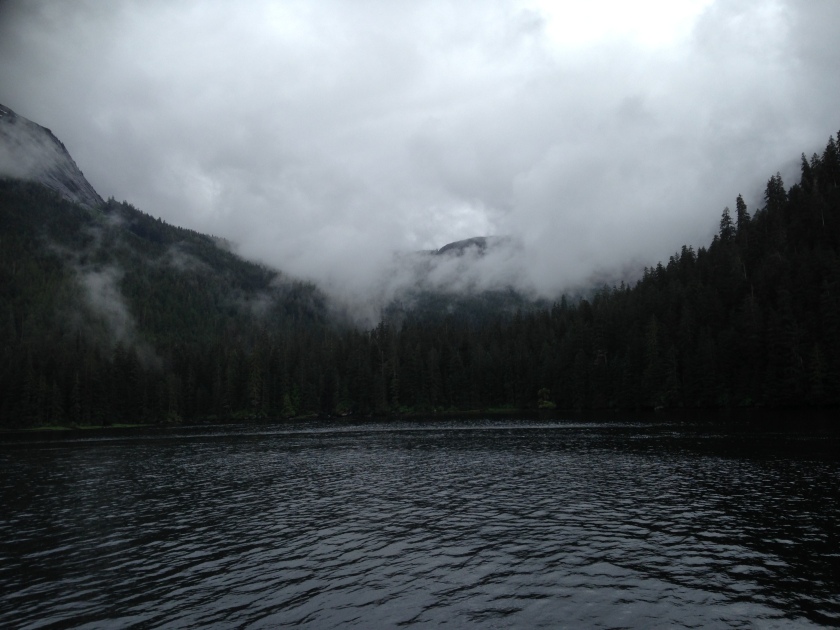 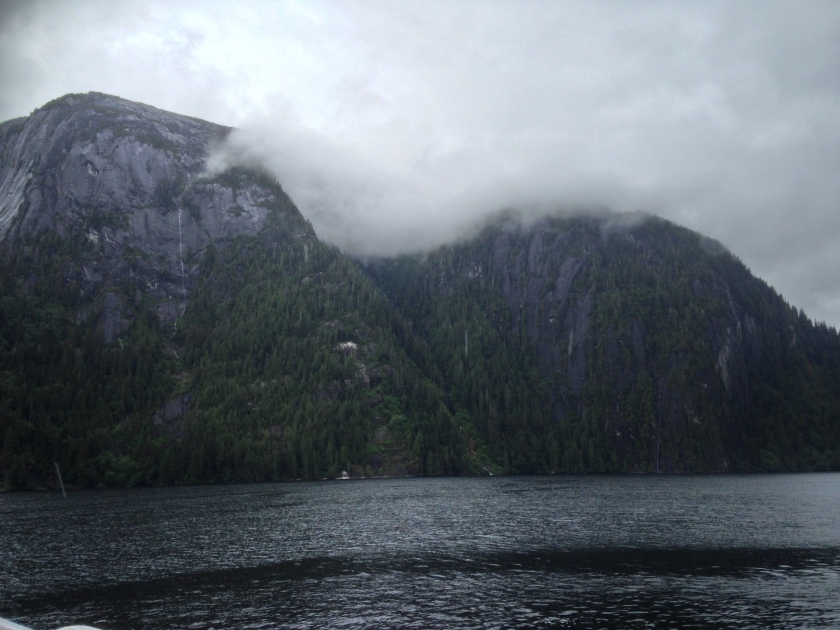 We were also lucky enough to spot some new born seal pups and their mother. The closed coves provide protection to new born seal pups from Orca whales, so this is a popular breeding ground. After spending a while sailing into the Fijords,  it was time to go out. I wish we could have gone on forever.

As we made out way back to Ketchikan, the local Tinglit guide regaled us with stories and customs of the Tinglit people. They also served up some delicious soups. We also heard about the local fishing industry and had the chance to try some Ketchikan Salmon. 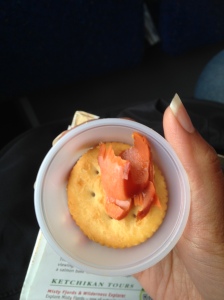 4.5 hours after we left the ship, we were back. We got some great views of Ketchikan (and the ship) from the water. 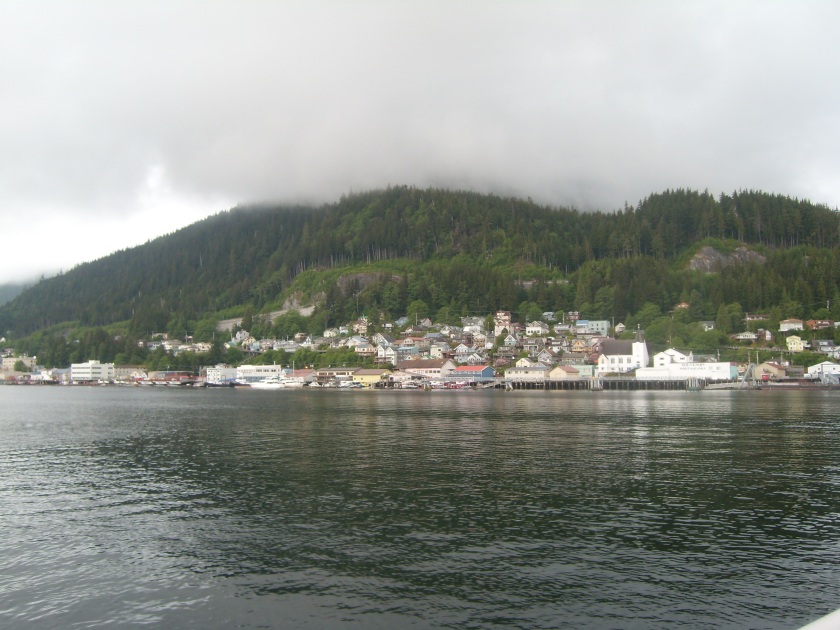 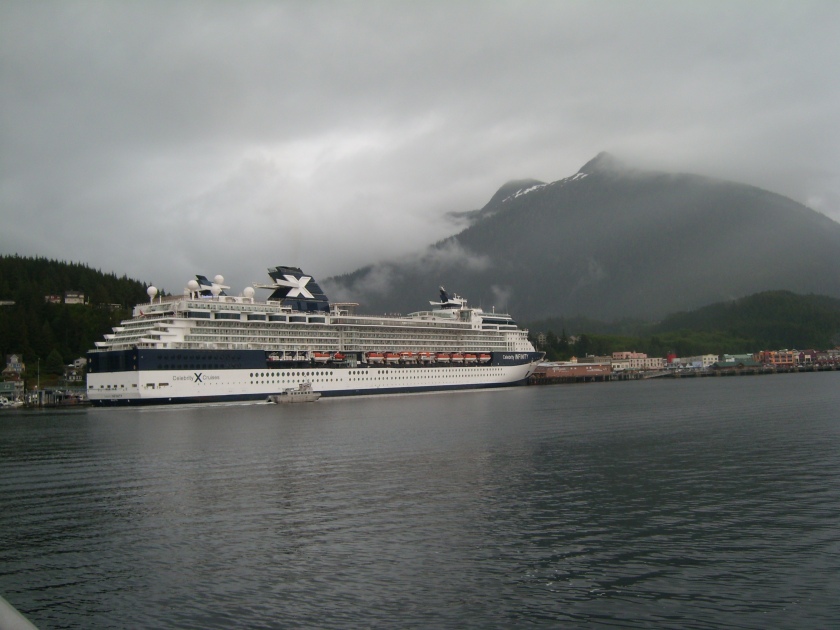 Although we explored the Misty Fjords by boat, a lot of people explore it by sea plane. There are pros and cons to both methods, and I’ve jotted down a few pros and cons of the trip we did.

I can fully comprehend why the Misty Fjords are known as the Yosemite of the North. It is one of the few places I’ve been so far that can’t be fully expressed in a picture (or in words for that matter). You need to be there and see it for yourself to believe that such a mythical place really exists.

This post is a part of #farawayfiles on 21st October 2016 with Oregon Girl Around the World, Suitcases and Sandcastles and Untold Morsels 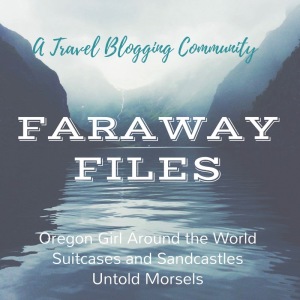