We started the day by exploring our home in Shanghai, the Astor House Hotel (Also known as the Pujiang Hotel). Dating back to 1846, it is one of the oldest hotels in Shanghai. It started life as the Richard’s Hotel and went through many transformations. Built in a colonial style,  in its hey day Astor House hosted many celebrities visiting Shanghai.

Today, it is one of the preserved buildings on the Bund. It is somewhat dwarfed by surrounding skyscrapers, but it is still a very good location, and still carries much of the old school glamour. 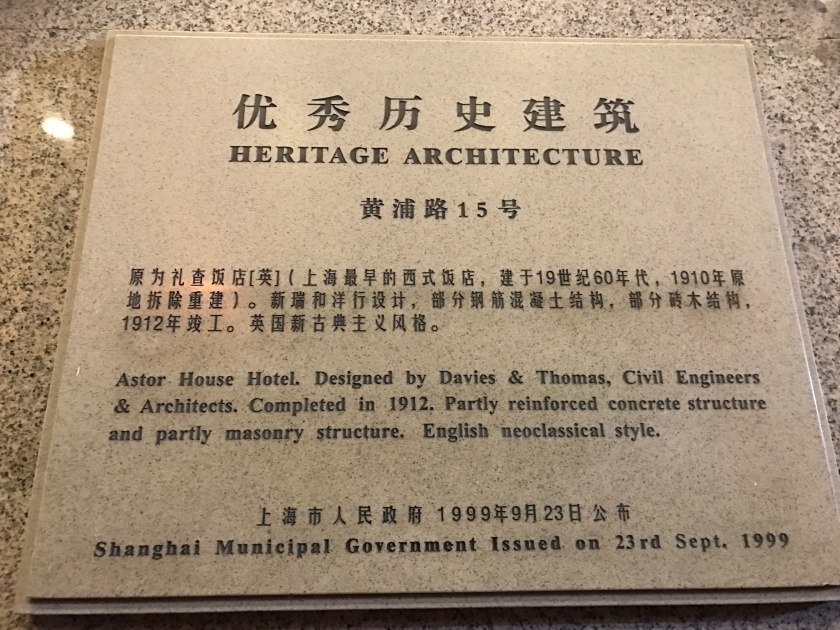 The lobby and the hallways of the hotel are adorned with many historical items from the hotel. Rooms where celebrities have stayed in are marked with plaques. You can stay in one of these “Celebrity Rooms”, but these will cost you extra. 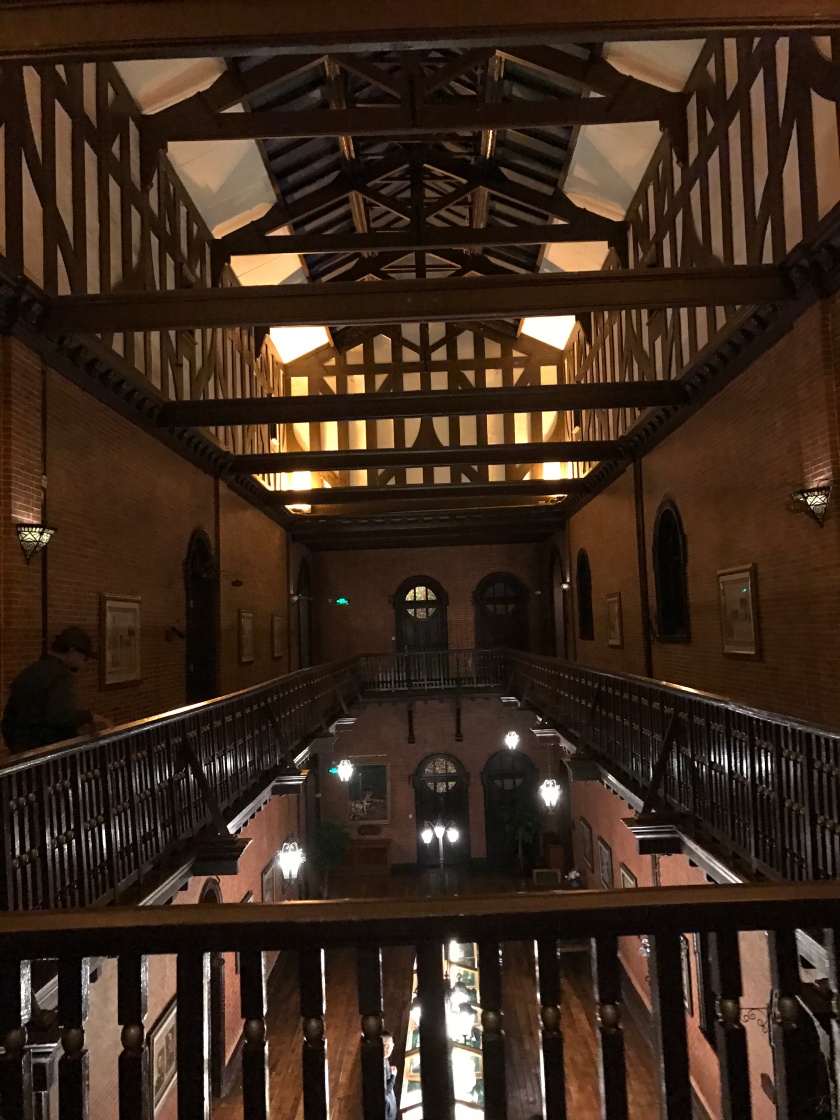 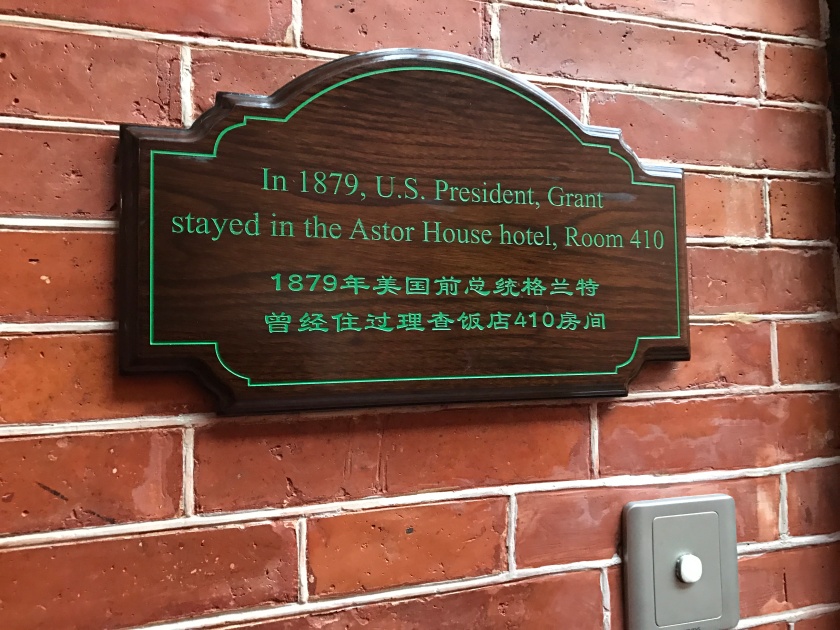 The peacock hall where breakfast is served is another superb room. In days past, this was a premier location in Shanghai for glamorous balls.

After exploring the hotel we headed to the Yu garden. It’s about half an hour walk from the hotel, but we decided to take a taxi, and the hotel arranged one easily for us. Rate cards for taxis are available from reception. The journey to Yu garden cost 20 Yuan (about £2.50), so not expensive at all.

The Yu Garden (also sometimes called the Yuyuan Garden) is an extensive Chinese garden in the middle of Shanghai. It was first built in the mid 1500s by Pan Yunduan, governor of Sichuan.  The garden stayed in the family for several generations before passing into the ownership of the local public.

In its long existence, the garden survived many historical events, such as the First Opium War,  Taiping Rebellion and World War II. The garden was opened to the public in 1961 and declared a national monument in 1982.

Entry to the garden is in the middle of the Shanghai bazaar near the nine bridge. It is well sign posted and not difficult to find, but you will have to weave through the shoppers in the bazaar. You need to buy tickets for entry which cost 40 Yuan per person.

It was a bright sunny day, and perfect for exploring this wonderful garden made of water, rocks and trees spreading over 5 acres. When you enter the garden, the hustle and bustle of the outside dies instantly. 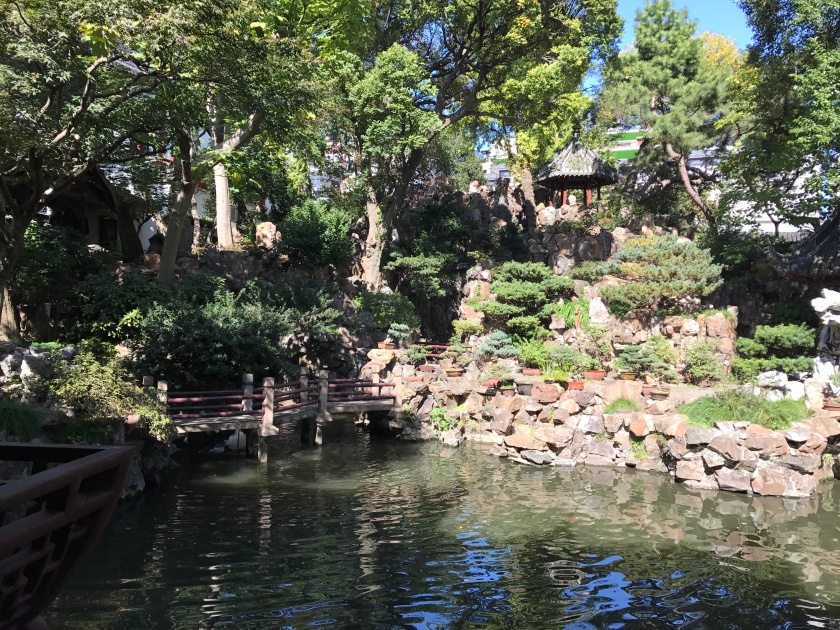 Pick up a leaflet as you enter the garden. This will guide you through the garden and its numerous archways, pavilions and streams. Or ditch the maps and choose to get lost, either-way, you are sure to enjoy your time here. 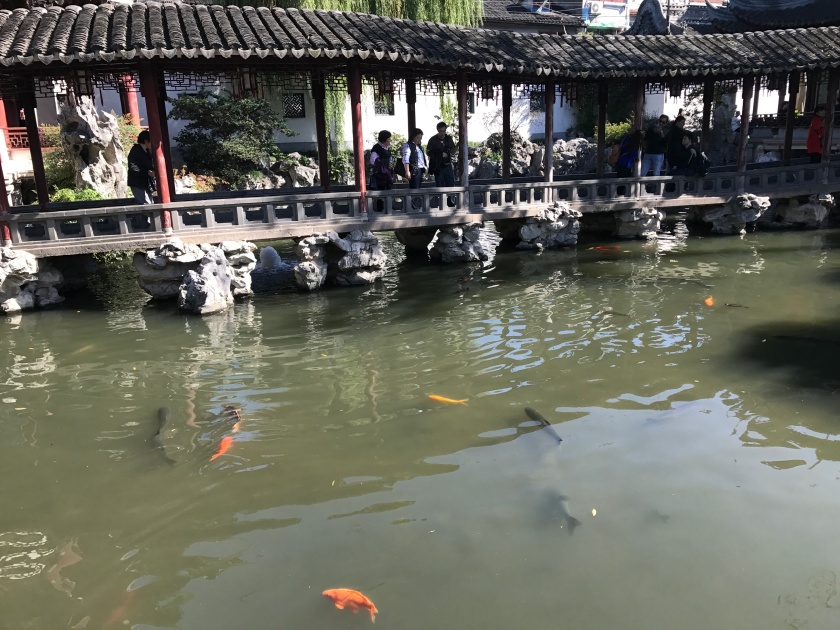 The following are photos of a few of my favourite features.

The Dragon Wall: A high wall surrounding most of the garden, shielding it from the modern city outside. The top of the wall is shaped like a dragon and you can trace the wall from its head to tail.

Archways: Many archways located around the garden, and they are all shaped like flowerpots, leaves, or trees.

Jade Rock: This is one of the main attractions in the garden. It is a naturally forming, very large  jade rock.

Sun bathing tortoises: The photo below says it all, I think. 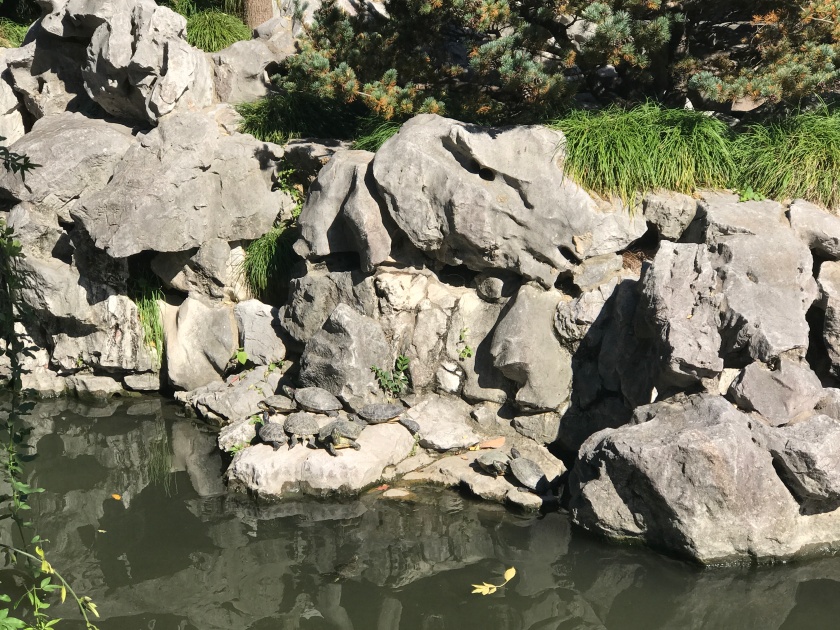 Pavilions: There are many pavilions dotted around the garden.  They are meant to be used for meetings, as a study, or simply to sit and admire the rockeries and the water. My favourite was this stone boat pavilion –  a wooden pavilion shaped like a boat, both inside and outside.

Theatre: There is a small theatre that is a smaller version of the three tier theatre we saw at the Summer Palace in Beijing. Most people seem to miss this part as it is tucked away in the corner near the garden exit.

After the Yu garden, we walked around the surrounding bazaar. There were many souvenir shops, and good bargains to be had, but you have to haggle really hard.

Afterwards, we walked back to the hotel via the Bund. The daylight view of the Bund was impressive, but not nearly as much as the night-time view.

We also saw many wedding couples taking photos by the Bund.

Vast majority of the audience were tourists, just like us. The theatre was only about half full for the performance. 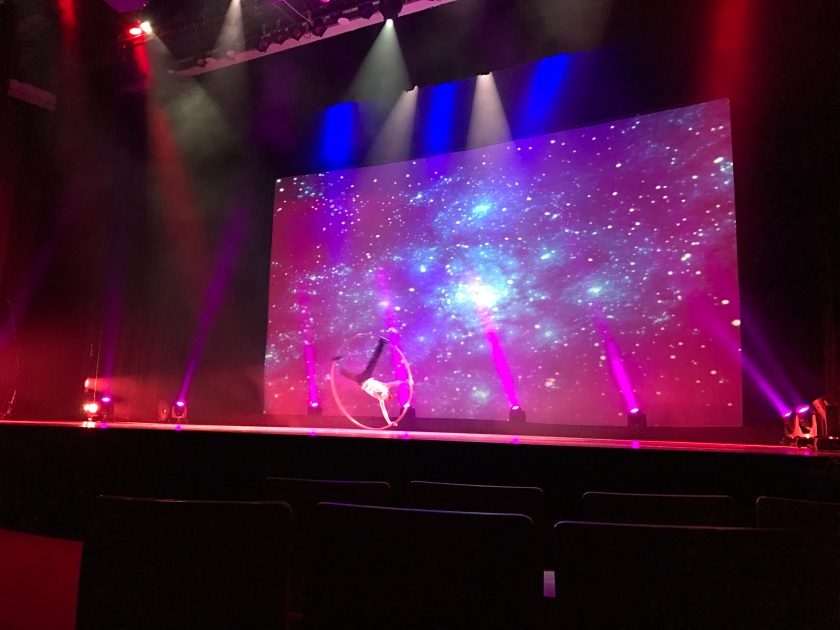 The show was about 2 hours long and consisted of dozen or so acts, a mix of traditional acrobatics, contemporary dance and magic. Some of the acts were truly phenomenal, but overall I found the show to be a tad underwhelming. Don’t get me wrong, I thought it was well worth the cost of the £30 ticket, and a nice way to spend an evening, but if I had to give something a miss, this would be it.

Reflections: After spending most of the previous day sitting still, it was great to walk around Shanghai and the Yu Garden. The Yu garden was impressive and relaxing at the same time, and the Acrobatics show was a great way to spend an evening.

Spring evening walks...(although, the day did start with snow)
Met these guys on a walk a couple of weeks ago....
Autumn is here!
G is for Grand Canyon. Another World famous sight, where the hype is well deserved. The Canyon stretches as far as the eye can see, and the coloured layers of rock is a geology lesson, where you can see from the present day to the Vishnu Basement rocks that are over 2 billion years old. I’d highly recommend staying overnight at the Canyon, to see the sunset and the sunrise and taking the drive down the “Desert View Drive” to see the Canyon from different viewpoints.
F is for France. I have lost count how many times I have been to France. I have been there in the winter, spring, summer and the autumn; in transit, for work, and for holiday. Always a pleasure, never a chore. Few photos from trips over the years:
E is for Eiger. The Eiger (meaning The Ogre) is ~4000m high mountain in the Bernese Alps. It overlooks Grindelwald and Lauterbrunnen in the Bernese Oberland of Switzerland. These photos are of the North-face of the Eiger - one of the six great north faces of the Alps, known for their difficulty in climbing and height.
D is for Dubrovnik. I visited Dubrovnik late last year. There is a lot of hype about this walled city on the Adriatic, and in my view, it is well-deserved. The city is immaculate and looks like something from a filmset. Nearby Lokrum island is great for a day trip and a dip in the blue sea.
C is for Carpathian Mountains. I saw the beautiful vistas of the Carpathian mountains during a trip to Romania in 2019. These mountain range is also home to the largest population of Brown Bears in Europe. (Swipe to see the 🐻)
B is for Birmingham Cocktail Weekend. Three days of summer, with more cocktails than you can imagine, at some of the best venues in Birmingham.
A is for Athens. Athens is a perfect destination for a short city break or a stop over on the way or from a Greek island break. The city is teeming with thousands of years of history, the Acropolis, the Parthenon, the Agora, to name a few. This photo is of the Temple of Hephaestus in the Ancient Agora.
It is editing season here @diaryofatourist. This photo is from my first ever post - about the Wookey Hole Caves - A system of limestone caves in the South West of England. We visited in January 2015. .
Another trip down memory lane. This was a day trip to Montenegro, last year. We went to Kotor, Budva, Perast and Our Lady of the Rocks. Hemmed in by granite mountains and dotted with Medieval Towns, Kotor Bay feels like it belongs in a fairytale. Polished up post now on the blog. Link in Bio. .
There’s the middle of nowhere, there’s the back of beyond, and then there is St Kilda. St Kilda is an archipelago located 50 miles off the coast of Outer Hebrides, and has the honour of being both the Western most British Isle as well as the most remote British Isle. It is also one of UNESCO’s 39 dual heritage sites around the World – and the only UK site on the list.
One good thing about the lockdown is that it’s giving me the time to catch up on blogging. I have been going through old posts and polishing them up. This photo is from my trip to Dubrovnik last year. Gorgeous sunny weekend, in a beautiful city. Blog post link in bio.
Wishing all my friends and family a very happy Sri Lankan new year! May the new year bring you much happiness, health and prosperity!
Spending the Easter weekend travelling Full Circle with Michael Palin. I’m halfway through the trip, and so far covered Alaska, Russia, Japan, Korea, China, Vietnam, Philippines, Malaysia, Indonesia, Australia and New Zealand.
Question: What do you get a travel nut for their Birthday?
Wishing a happy Lunar new year to everyone celebrating. Here’s hoping for better news about the coronavirus outbreak. Throwback photo from when we visited Chengdu Panda Breeding Research centre last year. .
Time to start enjoying Christmas presents! (Thank you @jeanette.reynolds.98). Top of my list this year was Michael Palin’s North Korea Journal. A fascinating insight into one of the most secretive states in the World, and to travel documentary film making. To top it off, the journal is so well written. (I clearly have much to learn about travel writing). I finished reading it in 24 hours (over 2 sittings), along with watching the documentary (available on @britboxtv) at the same time.
It’s beginning to look a lot like Christmas!