We visited Antwerp last December, for a pre-Christmas city break.  Antwerp is the second most populous city in Belgium, with a population of around 1.2 million.  We took a city tour whilst we were there and these are some interesting facts I learnt on the tour.

Antwerp means to “throw the hand”. According to legend, a giant called Antigon terrorised the city’s population, until he was killed by a local hero, who cut off the giant’s hand and flung it into the river. This gave rise to the name “hand werpen”, (meaning to “to throw” in Dutch), which evolved into today’s Antwerp.

Antwerp’s fortunes as a port city has been intertwined with its neighbours; Bruges and Amsterdam. Previously, Bruges was the main port city for this part of Europe, but as the river in Bruges silted up, the ships came to Antwerp. But when the river in Antwerp started to get too busy, the trade moved on to Amsterdam. Today, the city is famous as a centre of trade for diamonds and fashion.

Historically, Antwerp had a network of canals, making it very similar to present day Amsterdam, but as the trade started to dwindle, the canals became less important; So over time, most canals were built over with roads.

3. The Cathedral with One Spire

The Antwerp Cathedral of Our Lady has only one spire. (The second was planned, but never built). At 123m it is the tallest spire in the Belgium, Netherlands or Luxembourg.  The Cathedral is also the best place to see some of the works of Peter Paul Rubens; one of Antwerp’s most famous residents. 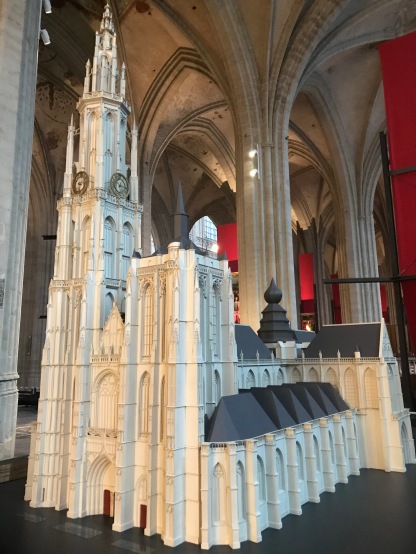 Model of the Cathedral

Rubens Painting inside the Cathedral

In front of the Antwerp Cathedral is a sweet statue of a boy and dog asleep under a cobblestone blanket. This is Nello and Patrasche, the main characters from the English story “A Dog of Flanders” (Before you google it, I have to warn you, it is a very sad story). The story was relatively unknown in Belgium, but very popular in the far east. It drew many tourists to Antwerp (where the story was set), so the statue was built in 2016 in commemoration (and as a good tourist attraction).

Outside the Cathedral, there are 4 copper statues of builders. Some believe this to be a memorial to Pieter Appelman, the Cathedral’s architect. However, according to our tour guide, there is an alternative story about the statues. Apparently, the king was coming to Antwerp for a visit and everyone was busy sprucing up the city. There was an unsightly gap in-front of the Cathedral, so they found 4 (unrelated) statutes in the basement of the church and placed them to fill the gap. It was to be a temporary measure, but they ended up staying. In the summer, this is a popular spot for “living statues” that blend in with the real ones (and frighten the living daylights out of tourists when they move).

Antwerp has one of the longest river tunnels in Europe, across the River Scheldt. The tunnel is pedestrianised, but is large enough for vehicles. The tunnel is accessed by a wooden escalator, and a lift that can fit an ambulance.

Overall, we liked Antwerp. Possibly because we saw many parallels between Antwerp and Birmingham – great food and drink, links to industry and plenty of culture; and somewhat under-rated. It is a good location for a city trip,  with cobble-stoned  streets lined with shops, bars and restaurants and a number of cultural hot spots. It is also a good base to explore other nearby Belgium cities like Bruges, Brussels and Ghent.

One of the many cobbled streets

Have you been to Antwerp? If so, what did you think? If you haven’t been, would you consider going? Leave a comment below and let me know.

*Special thanks to my friend, MT who organised the city tour.