It’s Day 4 (Read about Day 1, Day 2, Day 3), and the raison d’être of our Canadian road trip. We are going to drive down the Icefields Parkway from Jasper to Lake Louise.

Icefields Parkway is the drive between Jasper and Lake Louise on Highway 93, and is known as one of the most beautiful drives in the World.  This 232 km stretch of highway winds along the continental divide through soaring mountain peaks, icefields and gorgeous sweeping valleys.

There is a bit of debate about whether Icefields Parkway is from Jasper to Lake Louise  (232 km) or from Jasper to Banff (another 59 km). My trusty Jasper National Park guide says it’s between Jasper and Lake Louise, so I’m going with that. The guide also very helpfully marks all the places of interest along the way.

On this post, I thought to share our experience at some of the main stopping points and a few “in-between” scenery photos, finishing off with a few tips for the drive.

Start of the Journey

The start of our journey is in Jasper. We set off reasonably early (around 9am). However, to get to Icefields parkway from Jasper you have to cross the railway line. There was a goods train passing, so the crossing was closed. We queued up behind the waiting traffic and waited for the train to pass – but it seem to go on forever. We started counting the carriages, but stopped when it got to 50. All in all we had to wait for 15 minutes for the train to pass through.

Once out of Jasper, it was straight down the Icefields parkway.  It was a cloudy day and rain was threatening to make an appearance, but nevertheless, we pushed on.

Along the road there are many stopping points, offering up picture postcard views. There are brown signs marking these spots and lay-bys are available to park your car, get out and have a look.

Our first stop was at Athabasca falls about 30 km into the journey.  Athabasca falls is one of the main attractions along the Icefields Parkway and it is well signposted from the highway. There is parking available and many viewing platforms to absorb the surrounding beauty.

Athabasca falls is not a large waterfall, but certainly a fierce one. Even this early in the season (1st June),  it’s still a sight to behold, with the river Athabasca tumbling down into the gorge. 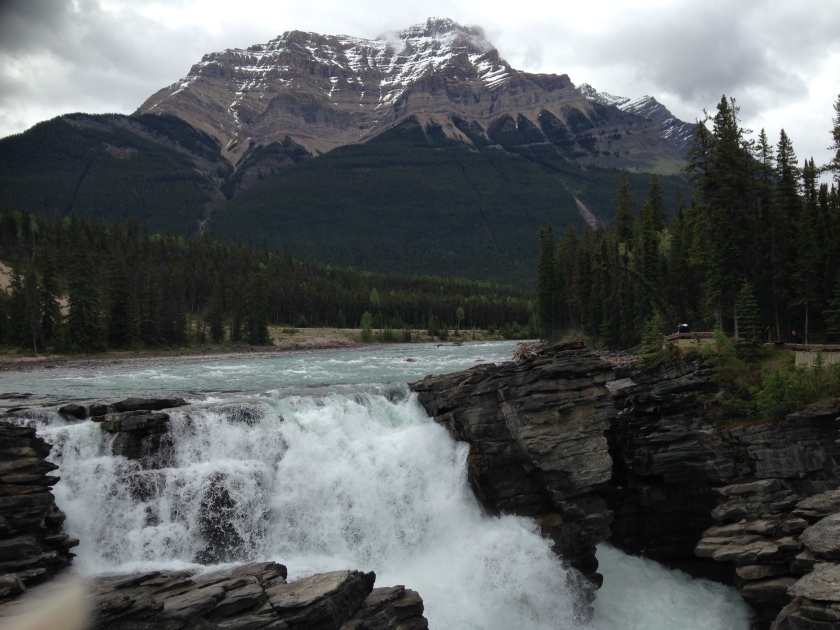 Although the waterfall isn’t very big, you have to tread carefully. There are warning signs near the falls which also tells the story of two people who fell to their deaths here.

The Athabasca river ‘falls’ over an edge of hard quartzite and carves through the softer limestone below, creating a short gorge and a number of potholes.  This reminded me very much of the Aare Gorge in Meiringen, Switzerland.

When  it comes out on the other side it is all calm, and the Athabasca river continues its journey towards Jasper.

There are many walking trails around, allowing you to take a closer look at the falls from many different angles as well as get close to the river.

Further down the road  (24 km to be exact) is the Sunwapta falls, a pair of waterfalls created by the Sunwapta river. The upper waterfall is a short walk from the car park and is the most visited. The lower falls is a 2 mile round-trip hike.

Both the Sunwapta river and Athabsca river are glacial rivers caused  from glaciers melting. Later in the day, we would get the chance to see the glaciers creating these rivers. 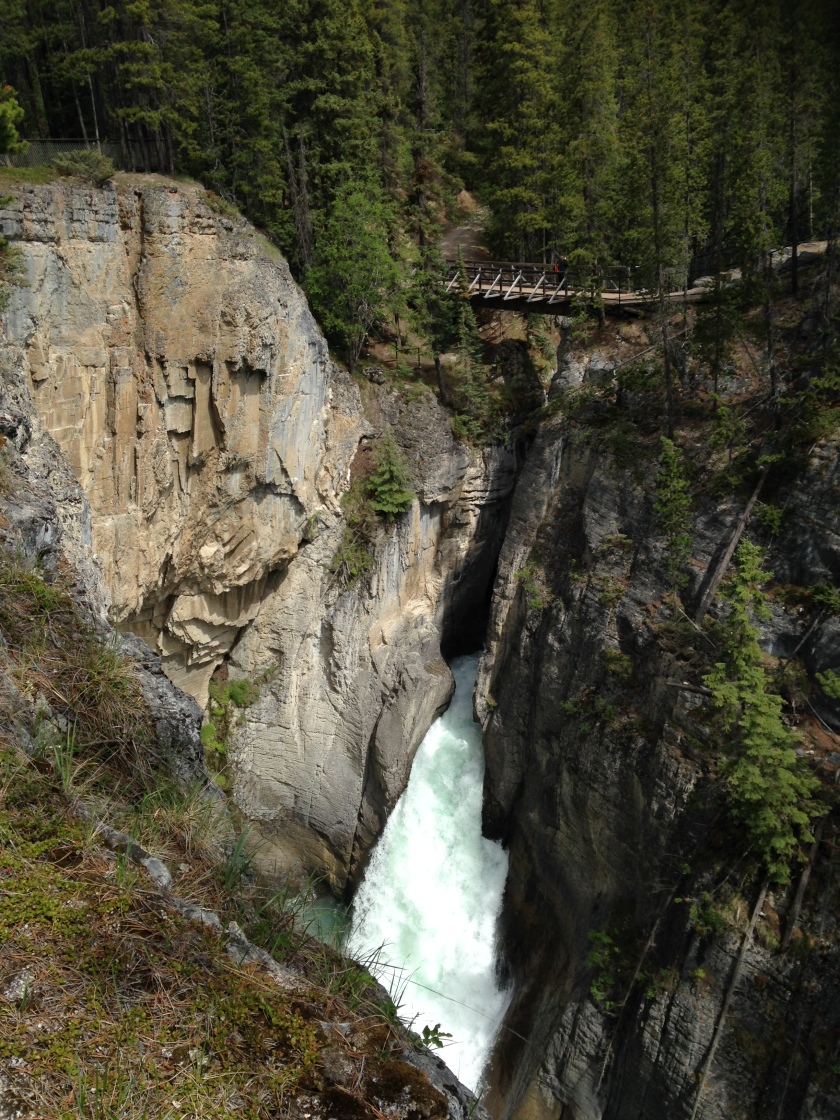 After spending a while at the upper falls, we decided to walk to the lower Sunwapta falls. (Bear spray in hand). The walk was through a thriving pine forest. There are lots of fallen trees across the path, so you can practice your high jump, hurdles or in our case, limbo 🙂 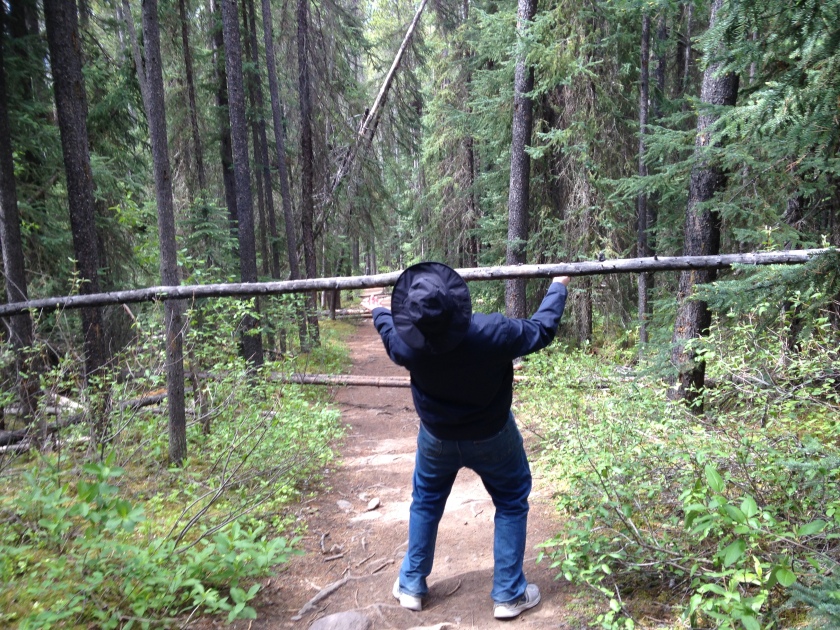 You get to follow the Sunwapta river down the gorge, and finally you get to the lower Sunwapta falls. The lower falls are smaller than the upper falls, but no less beautiful. 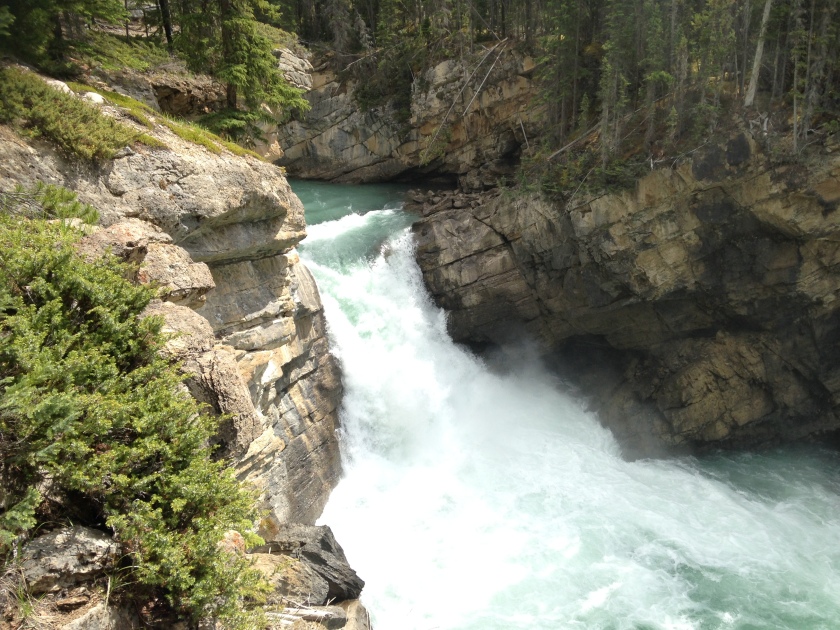 We could have spent a lot more time here, but we had a lot more to see, so soon we were back on the road, heading toward the Columbia Icefields. More wonderful scenery along the way.

The Columbia Icefield is located halfway down the Icefields Parkway (103 km from Japser). Sitting astride the continental divide, it is the largest icefield in the Rocky Mountains. It also spans two Canadian Provinces (British Columbia and Alberta) and two National Parks (Jasper and Banff).

After a few exciting hours walking on the Athabasca Glacier and the Glacier Skywalk we were back on the road, cruising along the second half of the Icefields Parkway.

You come across Wilcox Pass just a little (2.5 km) after Columbia Icefields. This is a beautiful lookout point where you can see the road stretching along for miles. The Wilcox pass hike is a very popular hike in the Canadian Rockies, offering view of glaciers, mountains, creeks, and the tangle falls.  We didn’t have time to do the hike, so instead we looked out from the view point – and what a superb view it was.

It was getting to be late afternoon and we still had a 100 km to go, so we decided to push on.  It might be me, but it seemed that the second half of the trip offered even more beautiful views than the first. 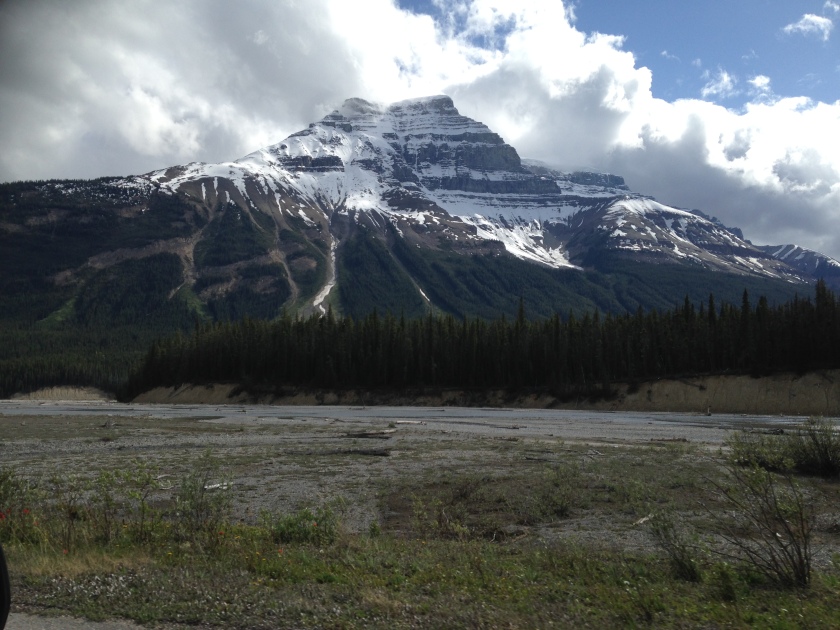 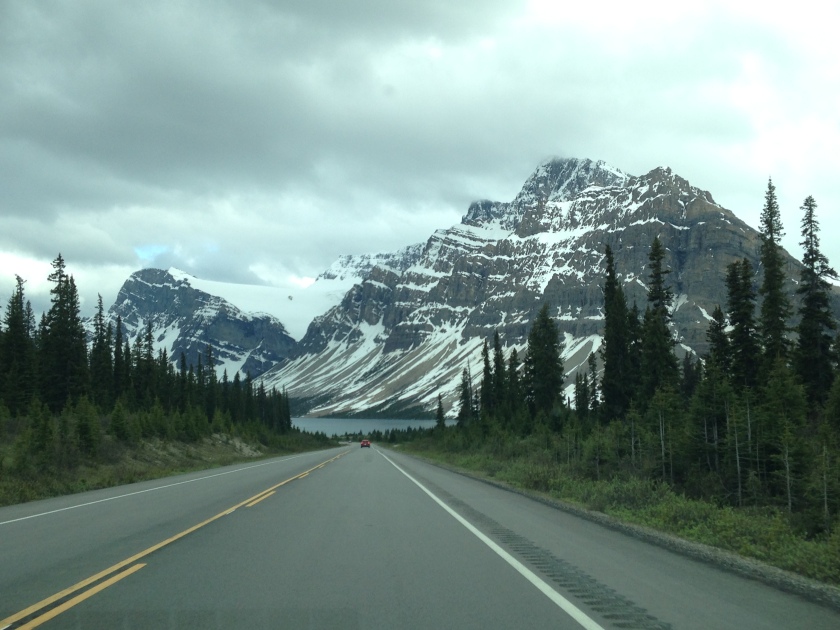 And at last, we have arrived at our destination, the gorgeous Lake Louise.  We were very tired, so we had to save exploring Lake Louise for the next day.

Driving down the Icefields Parkway was one of the most memorable experiences I’ve ever had. Never have I seen so many beautiful views in such a short time. (The only other day that comes close is my day in Lauterbraunne valley in Switzerland, visiting Trummelbach falls and the Schilthorn peak).

Tips for driving down the Icefields Parkway:

Have you driven down the Icefields Parkway? Or would you like to? Please leave a comment below and let me know.

I am linking this to #wanderfulwednesday with Snow In Tromso