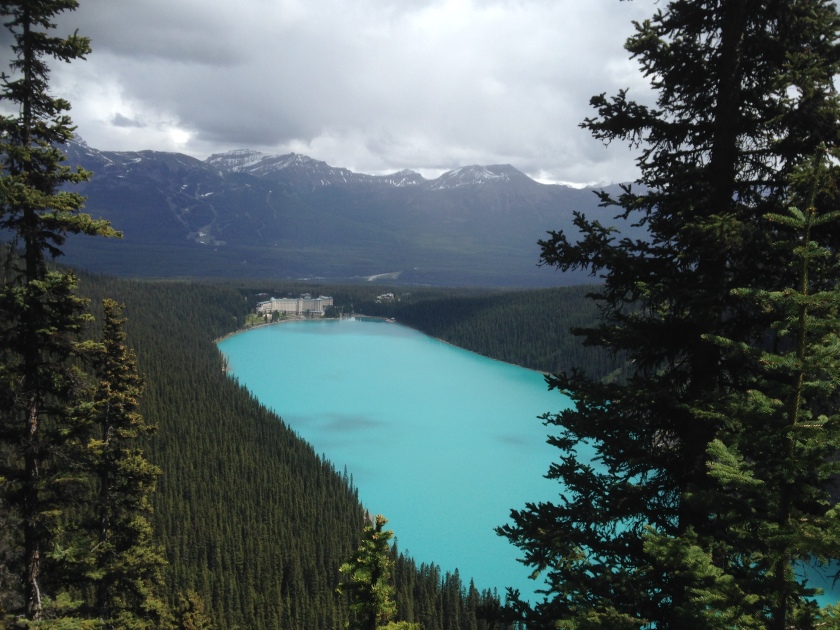 We were spending a day at Lake Louise, on Day 5 of our Canadian RoadTrip. (Read about Day 1, Day 2, Day 3, Day 4 here). We wanted a break from driving, so decided to stick close to the hotel and explore the area on foot.

It was promising to be a cloudy, but dry day, so we decided to go for a hike. There are many hiking trails available in this area, and we decided to hike to Lake Agnes, a lake hidden in the clouds, to the north of Lake Louise.  It was a reasonably long hike (6.8 km round trip). Another reason for choosing was that Lake Agnes has a tea house. We were tempted by the promise of a cup of tea and a cookie at the end of a grueling hike.

The trail to the Lake Agnes Tea House starts at the front of the lake. The trail is well sign posted. The first part of the hike was a steep climb along the mountain  to the North of Lake Louise. No photos for this part of the trek, as I was too busy huffing and puffing. Also, the first part of the hike was through dense forest, so there’s not a lot of see. Once we were further up the trail, we could  see Lake Louise through a break in the trees.

After a little break to admire the glistening turquoise blue water, we continued up the path. About three quarters of the way up the trail, we had another surprise waiting for us — Mirror Lake, with the “Big Beehive” towering behind.

Then a little further long the trail, you come to a little waterfall.

One last push to climb a set of stairs, we are finally at our destination: The beautiful Lake Agnes, with Mount Niblock and Mount Whyte in the background.

This lake was named after Lady Susan Agnes Macdonald, who was the wife of the first prime minister of Canada, Sir John A. Macdonald. She visited the lake in the late 1800’s.

Then it was time for a well-earned cup of hot chocolate (with marshmallows), in the cosy Lake Agnes tea house.

The tea house has no electricity or running water (infact, whilst we were there, the tea house lady put the kettle a stove, after filling it with fresh water from the lake). Supplies are flown in by helicopter at the start of the season, but all fresh food is brought up the trail by the staff. They were operating a limited menu, as they had only opened the tea  house for this season a couple of days earlier.

After enjoying our drinks, we had another good look around. On the other side to Lake Agnes, you get great views of Lake Louise, the Fairmont Chateau Lake Louise hotel and the Bow Valley.

After spending a bit of time absorbing the beauty of Lake Agnes, we considered what to do next. Our original plan was to return back to Lake Louise. But fortified by the hot chocolate, we wanted to push on further. Once you get to Lake Agnes, there are several more hike options available – hike to the big bee hive, little beehive or the plain of six glaciers. We decided to go for the plain of six glaciers, which was another 5 km away. This would mean we get to visit both tea houses in Lake Louise in one day.

As we got on our way, we got a pretty good view of the waterfall than drains Lake Agnes.

After this, there is a pretty steep climb down. When I say steep, I mean “climbing on hands and knees” steep, but this is only for a few meters, as the path re-appears. From this point, the trail is pretty flat (or down hill). We were walking though the trees again, on our left we got a glimpses of the Mirror Lake through the trees.

On our right was the “Big Beehive”. 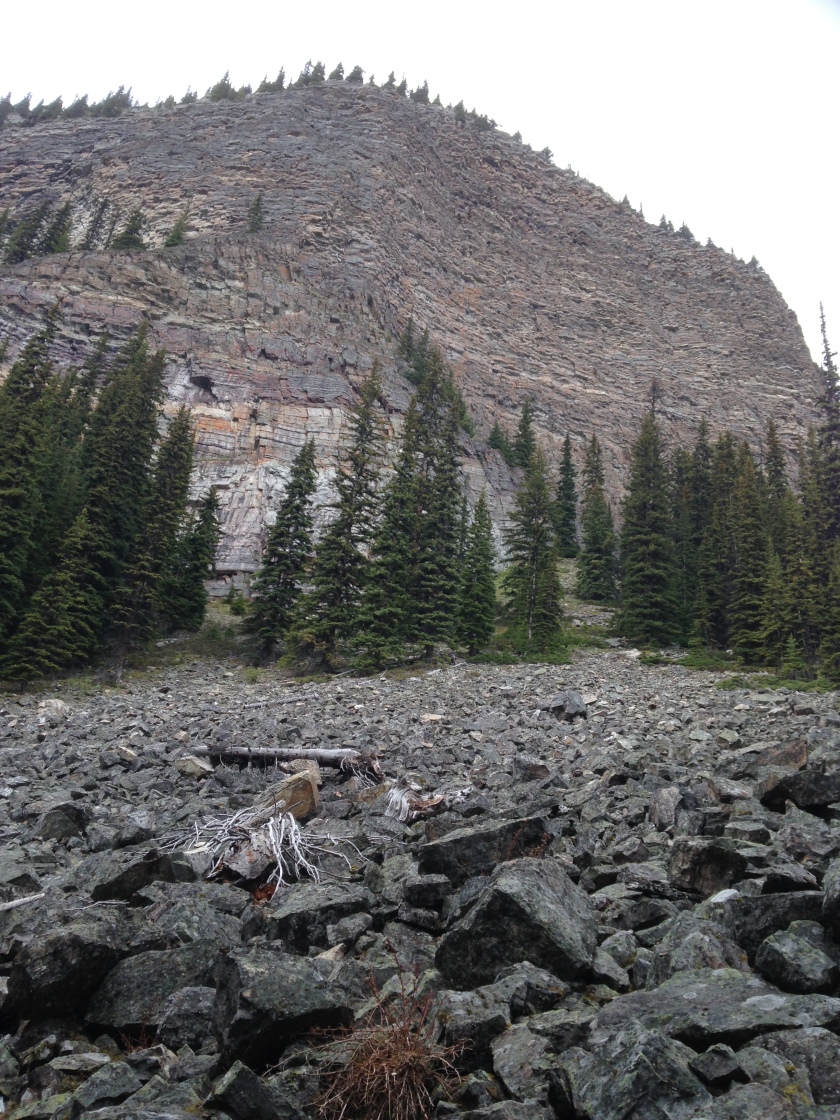 The trail continued through the trees and we started to get little glimpses of Lake Louise. After a while we came to a break in the trees, and we got this lovely view (which is one of my favorites of the entire trip). We were at the back of the lake now, looking from up high with the Fairmont Chateau hotel looking like a dolls house. The lake looked like a massive swimming pool.

Soon, we were out of the woods completely and we could see the Plain of the Six Glaciers in front of us. The trail gets narrow here and there are iron ropes fixed to the rock face that you can hold on to for support. The trail continues to be flat.

Still a couple of kilometers to go. Looking back, we can see Lake Louise in the distance, getting smaller and smaller.

From here, the climb gets steep again, but with each step we take, we are rewarded with better views of the glaciers.

Another half and hour or so of walking (and panting), we are at the plain of six glaciers, and more importantly the tea house. I’m gagging for some cake and a drink. 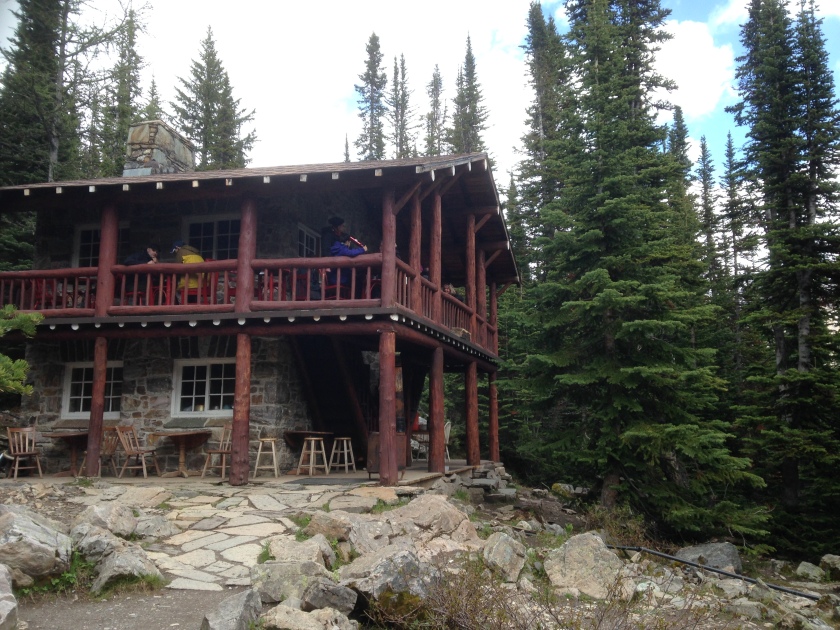 The tea house does not disappoint, and we soon had two steaming teas in front of us, accompanied by home made cakes and muffins. 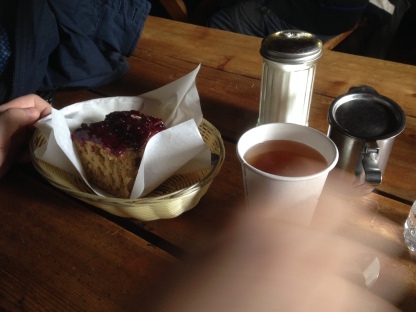 Same as the Lake Agnes tea house, this one is only open in the peak season (it had only been open for one week when we visited). They have monthly air lifts for dry goods, but all fresh ingredients are hiked up the trail by staff (who were really lovely by the way, and told us some funny stories about bear encounters.)

This tea house was built by the Canadian Pacific Railway (CPR) in 1924, as a rest stop for guests on their way to the Abbot Pass Hut. In addition to the main building which is the tea house, there are several surrounding cabins to house staff.

After the food, we went outside to have a good look at our surroundings.  Plain of six glaciers, as the name implies, is home to many glaciers. There is a helpful sign that points out all the surrounding mountains and glaciers. 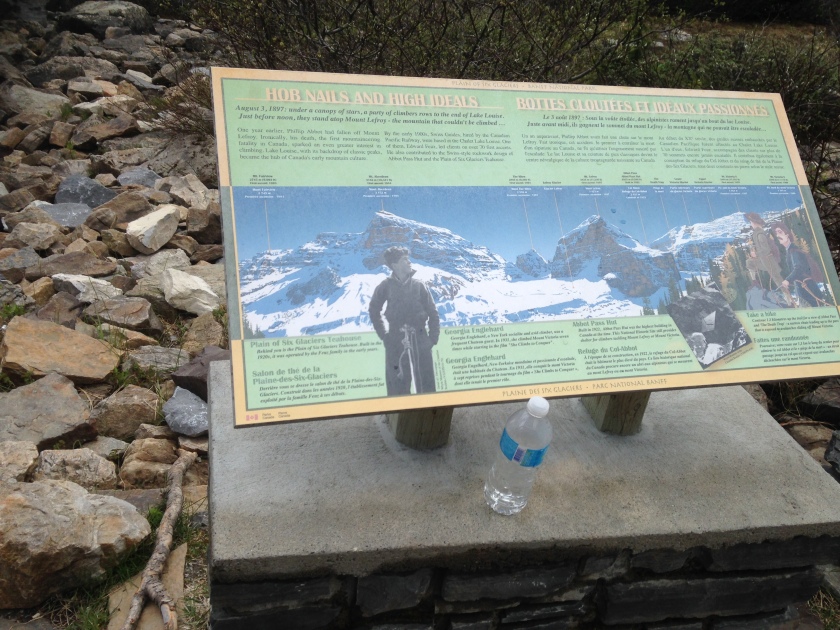 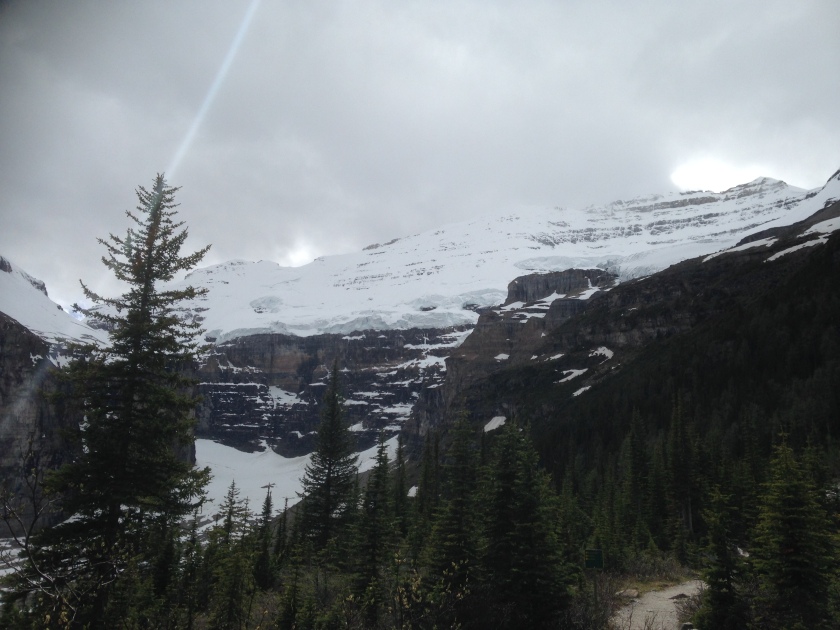 It is at this point I got accosted by a squirrel. Completely used to humans, this squirrel was convinced that I had food in my hand. (I think it mistook my phone for a bar of chocolate or something). It kept jumping in-front of me whilst I was taking photos. I unfortunately had no food on me, so after a while, it went on its way to another group of promising looking tourists.

From the tea house, you can walk another 1.3 km to the Abbot Pass viewpoint. This gives you a closer look at the glaciers and the Abbot Pass Hut. The hut sits at the top of the mountain, on the border between British Columbia and Alberta. It was built in 1922 by the CPR and has served as a base for mountaineers and hikers every since. It is the second highest permanent structure in Canada. The hut can be reached from Lake O’Hara in Yoho National Park, but this is recommended for experienced hikers and mountaineers only. It is technically possible to reach it from the tea house as well, by traversing the Lower Victoria glacier, but this not recommended for anyone. Due to the number of crevasses on the glacier and frequent rock and ice falls it is a very dangerous route. This part of the route is actually known as the “Death trap”, so I think that says a lot!

Our legs were screaming by this point, and the weather was starting to turn, so we decided to forgo the extra 1.3 km to see the Abbot Pass hut, and to head back don instead. But before we got on our way, we heard a clap of thunder. We turned to look at the glacier, just in time to see a large chunk of ice braking off one of the upper glaciers and falling onto the lower glacier.

We started out journey back to the Fairmont Chateau hotel. We were taking a different route to the one we came as we were going back to the hotel direct (and not via Lake Agnes). To our right was the little stream that starts from the glaciers and feeding Lake Louise.

One of the nice things about this part of the trail was that we could see Lake Louise all the time, getting bigger with every step we took.

Soon we were back in the tree line, but still getting great views of the glaciers behind us. The rain that had been threatening all day started to fall down by this point.

As we climbed down, the stream was still on our right, but it was getting larger and noisier. In the late summer months, this is where you need to watch out for bears. 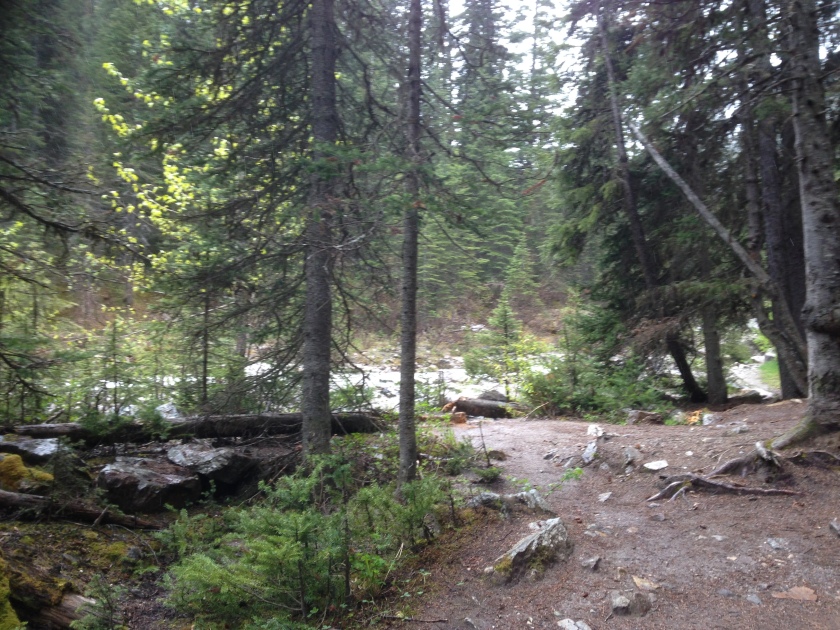 Soon, we were level with the lake and could see the hotel in the distance.

Here, the stream opens up into a wide delta and starts feeding the lake. It was great to see the origins of Lake Louise.

We were now on to the last 2 km of the hike along the shore of the lake Louise. It’s flat and well paved. 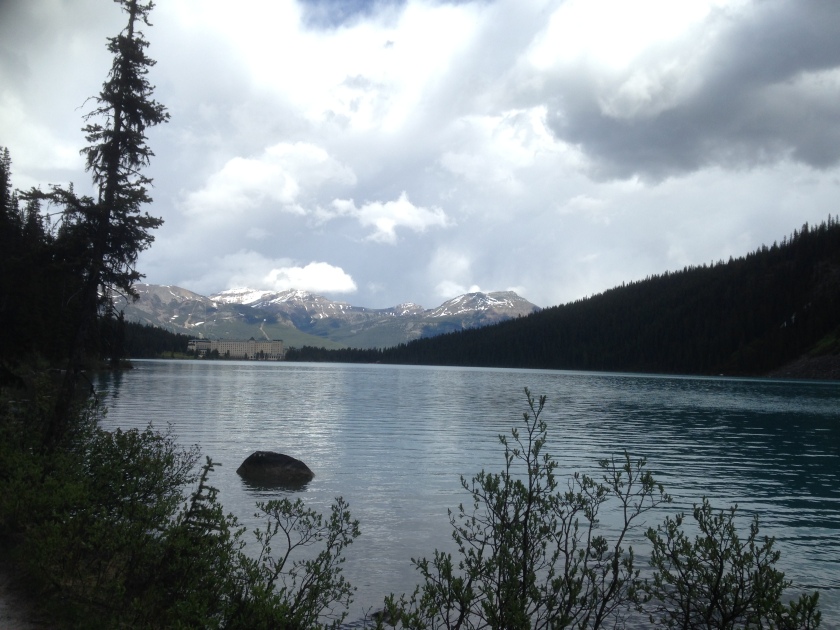 A bit further along the lake shore trail, I kept looking back and taking photos as I wanted to capture every possible view.

Soon, we were back where we started. From here we could appreciate how far we had walked on the day. It was very rewarding to look back on the glaciers in the distance and know that we had come into touching distance with them. 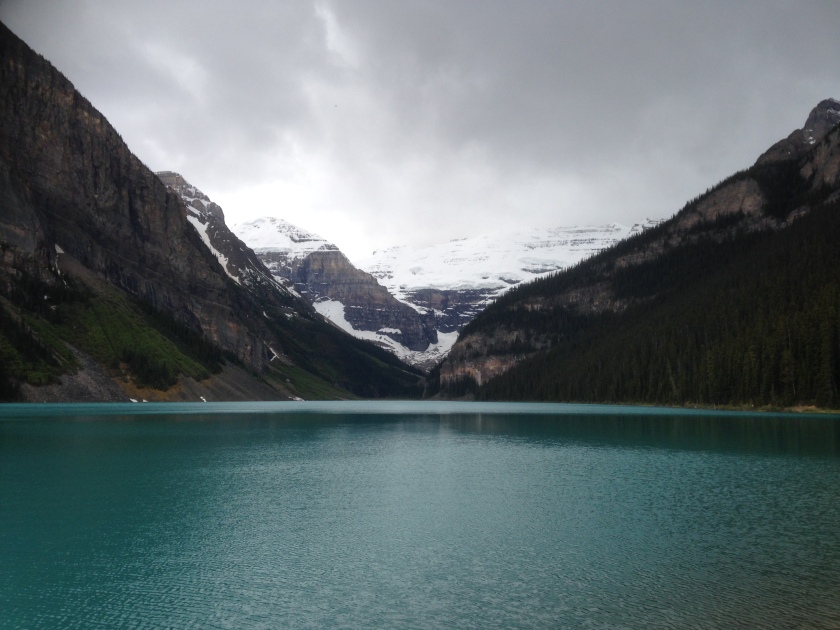 We had timed our return well. Soon the heavens opened and started to tip it down. But we could enjoy a well deserved reward inside the hotel, by  a picture window in the restaurant and a few treats. 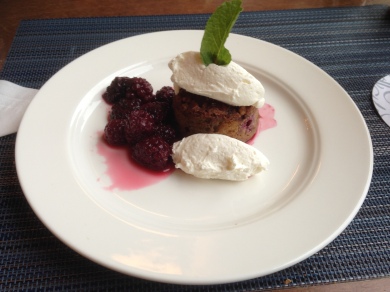 Tips for hiking to Lake Agnes and Plain of Six Glaciers

This post is a part of #farawayfiles on 24th November 2016 with Oregon Girl Around the World, Suitcases and Sandcastles and Untold Morsels